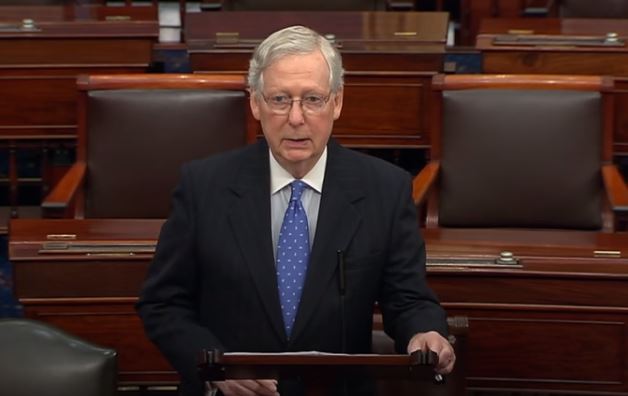 A Deadspin writer is accusing U.S. Senate Majority Leader Mitch McConnell of urging the return of Major League Baseball merely to cover up the Republicans' responsibility for allowing thousands of Americans to die from the coronavirus. Apparently, the GOP is the party of death rather than the abortion-crazy Democrats.

Sam Fels writes that "grim reaper" McConnell (appearing in file photo) wants baseball back for only one reason: to cover the Republican Party's "ass:"

"We know he’d make it a law to light your puppy on fire if he thought it would protect the richest among us and keep Republicans in the ascendency. So it should be no surprise that even though he heads the 'KEEP POLITICS OUT OF SPORTS, LIBTARD' party, he’ll happily use sports to cover for his party’s ass allowing thousands to die through sheer incompetence, ignorance, and indifference."

With venom dripping from Fels' poison pen, he writes that Sen. McConnell is "the biggest snake and fuckstick in the Capitol building who has set democracy back a couple of decades ...(hence Moscow Mitch)."

What set off Fels was McConnell telling a radio station that he contacted MLB Commissioner Rob Manfred to urge the return of baseball and he didn't mention specific precautions that would accompany the start of the 2020 baseball season. “If we can salvage part of baseball, surely we can salvage football, as well,” the senator said in the radio interview, further angering Fels.

The Deadspin Republican hater says McConnell gave the game away with the "money quote" about the return of football, too. "And that is probably the real fear for Republicans," because football is closer in time to the election. The absence of football would piss off people who will vote for McConnell and his kind, Fels estimates. "Take away their tailgates, and watch the revolution begin."

Fels criticizes the government for distracting people, and it's fair to conclude that, by "government," he means the Republicans:

"As we’ve discussed previously here, sports to our government is just a tool to distract. What McConnell wants, what Donald Trump wants, what George Bush wanted 19 years ago, was the appearance that things were getting back to normal. If sports are around, in whatever form, people might begin to feel more centered, and might assume that things are more under control and possibly forget about the problems they face. Which they most certainly aren’t. And they might not notice that their federal government has failed them in the biggest way if there’s still baseball to watch. That is McConnell’s only interest here."

Fels accuses the Republicans of wanting an appearance of normalcy that's gone, likely forever. "It’s just about the only card they have left to play."

"What McConnell doesn’t want is a prolonged feeling of helplessness, or anger, or anything that might make more and more people realize that he and his cronies don’t have any plans, or even interest, in doing what’s necessary. They’ve already fucked this up as much as possible, and now they need to spin as many plates as they can to make people forget that. Sports happens to be one of the bigger ones," Fels rants.

"They’re the Hee-Haw extras with assault rifles on various capital building steps (or in them) the past week. The ones screaming at police they had claimed to love so much when Colin Kaepernick was simply taking a knee on the sidelines before football games. That will be directed at only democratic governors for so long. These people will go utterly apeshit, or somehow more so, if they aren’t allowed to yell at children in pads on Friday nights or Saturday afternoons."

Conservatives, we are told, are all too happy to rant and wail when sports are used to point out things they have no interest in fixing or don’t even think of as a problem, as it has nothing to do with them. But if anyone uses sports as a platform to protest police brutality or advocate for lack of gun control and gay rights the same people will tell you you’re wrong for even bringing it into their daily enjoyment of sports.

"But when it can be a tool to cover for fucking up everyone’s daily routine and millions of lives irrevocably," Fels argues, "well then sports are most welcome in the political arena, aren’t they?"