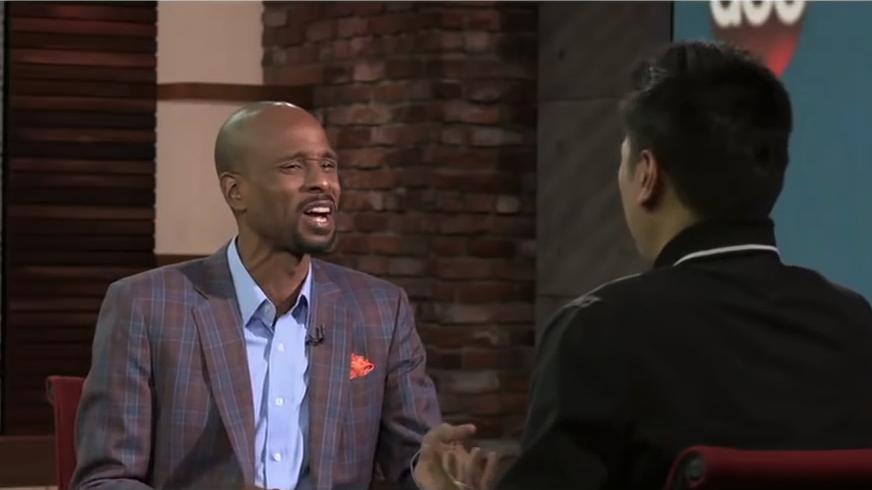 In another High Noon showdown, two more ESPN lefties bit the "bullet." Bomani Jones and Pablo Torre and their left-wing shtick will get till the end of March, and then their High Noon program will be designated for the television version of Boot Hill. Low and declining rating are listed as the cause of High Noon's impending death, according to ESPN.

Highly unpopular, High Noon lasted less than two years. It was drawing little more than 300,000 viewers a day for quarter one, down from last year, USA Today's Scott Gleeson reports. That's why ESPN pulled the plug and designated the co-hosts for the dreaded reassignment, according to this anonymous statement:

“Co-hosts Pablo Torre and Bomani Jones are extremely talented, and they helmed what we believe was a smart and nuanced show. Unfortunately, not enough people agreed with us. We look forward to discussing with them how to best utilize their talents across a variety of ESPN platforms."

Jones (at left in above photo) and Torre (appearing at right in photo) have been accused of bombarding listeners with their far Left views and have accused President Donald Trump of racism, while vigorously defending Colin Kaepernick.

Jones, who hosts The Right Time With Bomani Jones on ESPN Radio, is an ardent Kaepernick apologist and Trump hater. Writing on The Undefeated blog last August, he accused rapper Jay-Z of selling out Kaepernick by agreeing to serve as director for NFL Super Bowl halftime entertainment:

''For Jay-Z, doing business with the NFL, even with the potential to help “millions and millions of people,” as he put it Wednesday, is hard to reconcile with the indefensible unemployment of the man who spurred the league to get involved in these matters, whom Jay has called 'an icon.' It’s glaring that the Roc Nation partnership will serve a program Kap believes is a subversion of his initial message (and one where the league, not the Players Coalition, controls the board). ... "

Three years ago, Jones wrote on The Undefeated and accused the NFL of discriminating against Kaepernick:

“Stop hiding behind code. Stop trumpeting the idea that sports are the ultimate meritocracy, then shrugging and say ‘thems the breaks’ in the face of a visible potential case of discrimination. It’s intellectually disingenuous at best, indefensible cowardice at worst and sounds eerily like the worst of past evaluations and coverage of black athletes."

Yahoo! Sports referred to High Noon as an "experimental" show featuring two high-powered brainiacs. If that's what it was, it sure took ESPN a long time to figure out this experiment fizzled. ESPN pulled the trigger much more quickly on Jemele Hill and Michael Smith and their left-wing SC6 crusade a couple years ago.

"The show looked to set itself apart by focusing on the intellectual leanings of its hosts," writes Yahoo's Jason Owens. "Torre is a Harvard graduate and Jones has a pair of masters degrees in economics — one from the University of North Carolina and another from Claremont Graduate University.

"Both are outspoken and tend to look beyond the field of play to the broader social, economic and cultural impact of sports in their analysis."

ESPN President Jimmy Pitaro has stressed that his network is not a political organization, but the departures and reassignments of its left-streamers continue at a slow pace.