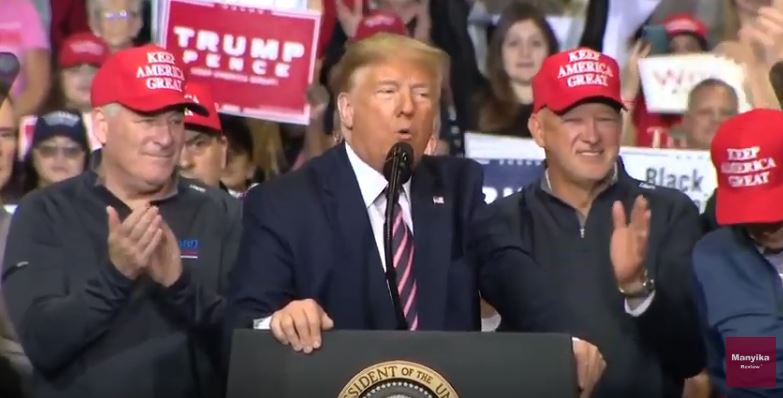 Hollywood's 2004 movie on the 1980 Miracle on Ice Olympic hockey champs included President Jimmie Carter's downer "crisis of confidence" speech. President Donald Trump, on the other hand, associated the team with a much more uplifting spirit of American greatness in recognizing them Friday night in Las Vegas.

On the team's 40th anniversary, President Trump honored several members of the team that had shocked the mighty Soviet hockey team and won Olympic gold in 1980.

Team members joined the president on the stage, and he referenced the victory over a supposedly invincible Soviet team as "one of the greatest moments in the history of sports." Team members in attendance wore "Keep America Great" baseball caps as they lined up behind the president's podium Friday.

The late Herb Brooks, who coached that team, was represented by his daughter Kelly Brooks. She teared up on the stage and said her father "would be proud to be here with you all and in my personal opinion, he would've been a Trump fan." 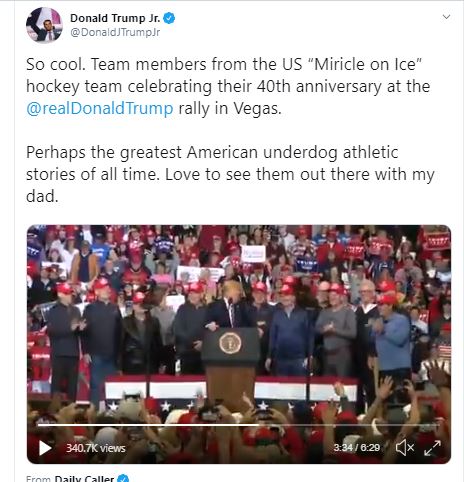 Mike Eruzione, who captained the 1980 gold medalists, called it a "great honor" to be invited to join the president in Las Vegas. President Trump asked him, "Just tell them: Am I a good athlete and am I a good golfer?"

"You are, yes, sir. Whatever you say!" Eruzione responded.

President Trump mentioned that the Olympics are coming back to the U.S. again in 2028, in Los Angeles:

"And by the way, we've got the Olympics coming back. They're coming to Los Angeles. Thank you, thank you, President Trump. ... I'm the one who pulled it off."

The Friday night rally was clearly a political event and so was the Hollywood movie, with its frequent references to political events of that time. President Carter used the U.S. Olympic team as a pawn against the Soviet Union's 1979 invasion of Afghanistan. He refused to allow U.S. athletes to compete in the Soviet Union that summer. Four years later, the Soviets boycotted the Summer Games in Los Angeles, citing concerns for their safety.

"I want to talk to you right now about a fundamental threat to American democracy... ... The threat is nearly invisible in ordinary ways. It is a crisis of confidence. It is a crisis that strikes at the very heart and soul and spirit of our national will."

Months later, voters blamed that "crisis" on Carter as they elected the more positive Ronald Reagan to replace him as president. Reagan would use a "Morning in America Again" theme in his 1984 re-election campaign, a refreshing change from the doom and gloom of the Carter years.