The Nation's Global Warming Freak-Out: Sports Will Either 'Sink Into Sea or Burn' 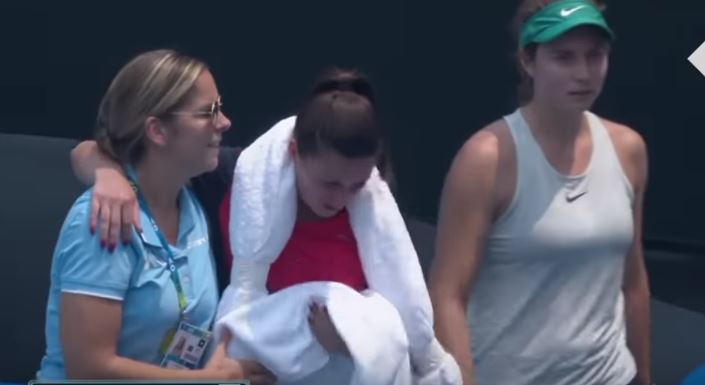 The smoke and heat plaguing the ongoing Australian Open tennis tournament and threatening the health of contestants aren't just an unfortunate set of circumstances. Oh no, it's a matter of the sports world sticking its head in the stand and ignoring the world's ongoing climate catastrophe, writes The Nation magazine sports editor Dave Zirin.

The poor playing conditions in Australia besetting this Grand Slam tennis event have caused chest pains, vomiting and dizziness. Slovenian Dalila Jakupovic (see photo of her helped off tennis court, right) collapsed and quit her match after an uncontrollable coughing fit. Dustin Brown had to use asthma spray to help him breathe better. That's all the climate alarmists needed to politicize the fires as an open and shut case of global warming. Zirin said all outdoor sports will be profoundly affected by our heating climate and he wonders if the sports world will do anything or just let it burn:

"This crisis at the Australian Open is a living, present-day example of the ways that climate destruction is invading and warping the normally hermetically sealed entertainment chamber that is the world of sports. That neutrality will no longer suffice. It can either strive to be a part of the solution or it can be an instrument of distraction. If they choose the latter, the minders of our games will be obscuring the severity of the problem even as their own sports sink into the sea or simply burn."

"The more I think about the conditions we played in a few days ago, the more it boils my blood. On tour we let so many things go that aren’t right but, at some point, we have to make a stand. All players need protection, not just a select few."

Other players are demanding collective action and calling for tennis's great players, Roger Federer and Rafael Nadal, to speak out about the adverse conditions. Canadian Vasek Pospisil said, “It’s time for a players’ union. This is getting absurd.”

Zirin says the climate catastrophe has become a workplace safety issue. "Imagine if the players went on strike to cancel the Australian Open in the name of their own health as well as in solidarity with those affected by the fires. Such actions, once unthinkable, might soon become a necessity."

This is not the first time the heating of the planet has been an issue at the Australian Open, Zirin says. Nor is it the first time it's gotten ridiculously hot down under in the summer time, which runs from December to February.

"In 2014, temperatures rose to 108 degrees, causing players to pass out, vomit, and burn their skin on chairs," Zirin recalls. "The sneakers of one player actually melted. This led to new restrictions related to heat starting in 2015. Officials, however, did not foresee the impact of the country being on fire by 2020. Perhaps they should have."

Doomsday is nearing and other sports are at risk due to the warming crisis, too. Zirin predicts that global warming could lead to the end of outdoor hockey rinks in Canada! Golf could ultimately have to become a sport played in domes as rising oceans swallow whole courses!

While the climate alarmists freak out about the Australian fires, British journalist Lord Christopher Monckton calls it "Bush Bull" in a recent column. He blames those fires on drought and refusal by the Australian government to allow the thinning of brush, which could have reduced ground fuel and lessened the fires' intensity.