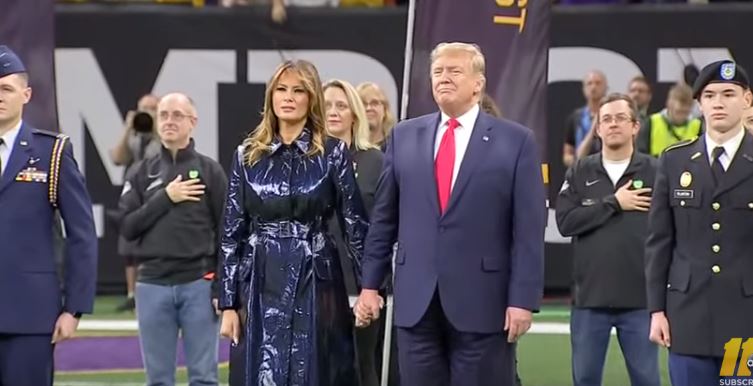 President Donald Trump's appearance at Monday's National Championship college football game in New Orleans was a safe political move that came during a turbulent time in his presidency, reports Yahoo! Sports writer Pete Thamel. An MSNBC source suggested the president used the appearance in a red state to distract attention from the impeachment and cozy up to his political supporters. An NBC News headline went even further, declaring, "Trump joins LSU and Clemson in bid to turn college football into a sports-themed MAGA rally".

In attending his third college football game of the season, President Trump drew rousing support for the third time. Thamel noted he was introduced before the playing of the Star Spangled Banner "to a massive ovation and chants of 'U-S-A! U-S-A!' ”

The New Orleans playing site of the National Championship Game is located in the heart of Southeastern Conference country where Trump ran up the score in his election victory over Hillary Clinton. 58 percent of Louisiana voters and 55 percent of South Carolina voters cast their ballots for the president. Nonetheless, Thamel suggested his attendance at the game was political:

"Trump’s appearance at the title game comes during a turbulent time of his presidency, which led some to speculate that he’s using the game as a distraction from the impeachment hearings and political tension with Iran. [Howell] Raines [former New York Times editor and current political commentator for MSNBC] joked that one of the hallmarks of the Trump presidency was his ability to 'change the subject,' sometimes as quickly as with a tweet. ...

“[The appearance] cements his relationship with his core constituency. Certainly, he couldn’t be safer politically in South Carolina and Louisiana.”

John Couvillon, a Louisiana-based pollster and political consultant, said, “This is a harmless diversion. He gets to show his face at something that’s not involving impeachment or Iran or the presidential election.

“He sees it as a harmless way to show his face,” Couvillon added. “The thing that he appreciates is that in Southern states, particularly in Louisiana, is that football and politics get equal billing in terms of being the top sport.”

Thamel explained that President Trump also received great support in his appearance at the Army-Navy game and the LSU-Alabama game during the regular season.

The Yahoo! writer also mentioned that the president was roundly booed at a World Series game in Washington, D.C., and received a "mix of cheers" at a UFC event a few weeks later.

Covering Trump's NCAA championship appearance for NBC News, Will Leitch writes the president has discovered it's hard to find the support he covets outside of MAGA campaign rallies, so he craves favorable audiences to politicize the apolitical:

“Trump has always carried himself like someone who is constantly hearing tens of thousands of people chanting his name in his head, so when at an event like this, when it’s actually happening, he’s in his natural element. That’s a fix you can’t get in the White House."

Leitch also alleges that Trump brings chaos with him everywhere he goes, including college football title games in friendly territory.

By comparison, when former President Barack Obama attended an NBA game last season, it was not declared a "Hope and Change" rally by media. Nor was Obama accused of cozying up to NBA coaches. Instead, Huffington Post's Ed Mazza said he "was given a rapturous welcome in Toronto as he attended Game 2 of the NBA finals between the Golden State Warriors and Toronto Raptors."