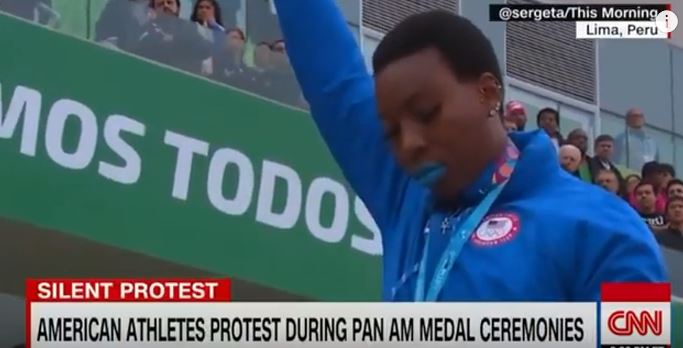 IOC officials have been on heightened alert for the upcoming Games because of the rising tide of athlete protest in recent years. Also, two American athletes staged protests at the 2019 Pan American Games in Peru. Hammer thrower Gwen Berry (seen in photo) raised her fist on the victory stand after winning Gold, and fencer Race Imboden kneeled on the podium after his team won Gold. Both were reprimanded and given 12-month suspensions.

Olympians will face these restrictions at all Olympic venues in Tokyo. There will be no:

Those who disobey the directive will reap consequences, though it's not yet known exactly what that would entail. The IOC's three-page document says: “Each incident will be evaluated by their respective National Olympic Committee, International Federation and the IOC, and disciplinary action will be taken on a case-by-case basis as necessary."

Bushnell wrote: "The document published Thursday clarifies the notorious Rule 50 of the Olympic Charter. 'No kind of demonstration or political, religious or racial propaganda is permitted in any Olympic sites, venues or other areas,' the Charter reads.

"This past summer and fall, after three-plus years of protests of all kinds across many sports, Olympic officials realized they needed to address the rule’s ambiguity."

“The Olympic Games are always a global platform for the athletes and their sporting performances. They are not, and must never be, a platform to advance political or any other potentially divisive ends. We stand firmly against the growing politicization of sport because only in this way can we accomplish our mission to unite the world in peaceful competition. As history has shown, such politicization of sport leads to no result and in the end just deepens existing divisions.”

Global Athlete, an international “progressive athlete start-up movement,” immediately went on the offensive against the IOC, tweeting: “Let’s be clear, the Olympic Movement has already politicized sport." It continued:

“To mention a few instances; in PyeongChang the IOC promoted a unified South and North Korean team; the IOC has an observer seat around the United Nations Assembly; the IOC President regularly meets with Heads of States; the Olympic Movement notion of sport autonomy is overshowed by Heads of States also fulfilling roles as heads of National Olympic Committees and heads of IOC Commissions hold Ministerial positions.

“This ship has sailed; the IOC has already politicized sport. ... Freedom of expression is a right!”

Bushnell, who said this contentious conversation will continue throughout the year leading up to the 2020 Olympics in Tokyo, disputed the validity of the IOC's statement that sport “is neutral and must be separate from political, religious or any other type of interference. But the IOC is determined to protect Olympic competitions themselves from anything that might deter or anger viewers."