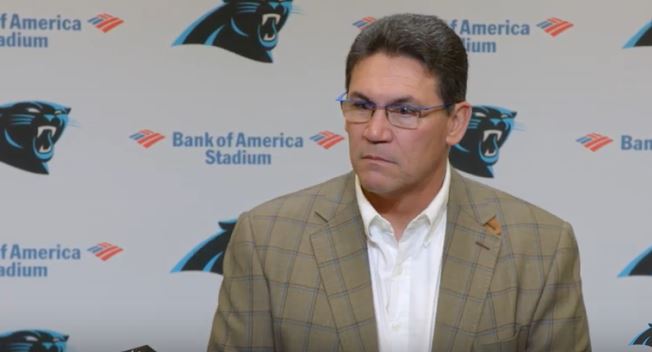 They do the math and the eyeball tests differently at The Undefeated, the race-baiting ESPN blog. Until Tuesday, there were three African American head coaches and one Latino head coach in the NFL. That day the Carolina Panthers canned Latino head coach Ron Rivera and named African American Perry Fewell the interim coach, upping the number of black head coaches in the league from three to four. It's not rocket science here, but The Undefeated claims this coaching move makes the NFL ''whiter.''

Enter Jason Reid, one of The Undefeated's reliable race-baiters, who insists that the simple addition of a black head coach makes racism a bigger issue. "Although Black Monday is more than four weeks away, the NFL’s head coaching ranks became whiter Tuesday with the firing of Carolina Panthers head coach Ron Rivera."

Reid admits that Rivera (appearing in final press conference as Panthers coach) was on thin ice with the slumping Panthers, but the point of his story is that racism is rampant in the NFL. Overlooking Fewell, Reid complains that Mike Tomlin of the Pittsburgh Steelers, Anthony Lynn of the Los Angeles Chargers and Brian Flores of the Miami Dolphins are the only "full-time" coaches of color in the NFL.

Carolina is already looking for its next head coach, and the pressure is on the team to make race the foundation of its search. Reid and the Fritz Pollard Alliance, an organization that exists to pressure the NFL to hire minorities, are already waving the race card at the Panthers.

Reid says the alliance "hopes that the Panthers, as well as all teams that make changes with their top coaching positions, will strongly consider deserving candidates of color." Rod Graves leads the alliance and, according to Reid, "is eager to help Panthers ownership chart a course forward with diversity in mind."

Graves said the Fritz Pollard Alliance is very concerned about the dwindling numbers of minority coaches in the NFL. "At some point, we hope to have a conversation with the ownership in Carolina, and we expect that that will be soon.”

And Reid is very concerned about the number of coaching jobs going to white men. Five black head coaches coming off losing seasons were fired after the 2018 season, and Reid says never mind all those losses because the state of diversity in the NFL is discouraging.

Coaching is only a part of Reid's indictment of the NFL.

Race baiters don't concern themselves with individuals making personal decisions about where they want to work. High-ranking African Americans serving NFL teams as leaders in business and public relations have left the league for lofty positions with other organizations. Kevin Warren bolted the Vikings' front office to become commissioner of the Big 10 Conference, and Tony Wyllie left the Redskins for a position with Special Olympics.

Race-mongers like Reid have no argument with African Americans holding 70 percent of the player spots in the NFL, but off the field they make it all about numbers and quotas.