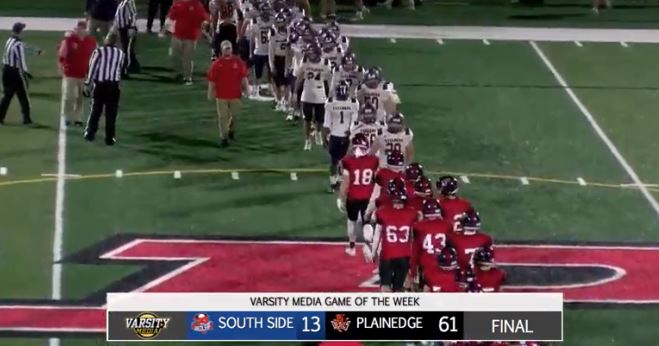 The loony Left puts another dent in American culture. On Long Island, a goofy concoction known as the "lopsided score committee" suspended a high school football coach who recently directed his team to a victory exceeding Big Brother's allowable 42 points! Just another day at the office for ridiculous regressives.

In a battle of undefeated teams in Nassau County, New York, Plainedge High hammered South Side 61-13. The coach of the team that failed to score enough touchdowns and failed to make enough tackles, South Side head coach Phil Onesto, said he had no issue with the game's outcome.

"I had no issues with how he was running his team," Onesto told FOX 5 NY of his rival. "Even after the game, Coach Shaver and I, we spoke and there was no bad blood. I congratulated him on the win and wished him luck next week."

CBS's Chris Bengel writes, "There is a county policy that states if a team wins by more than 42 points, they have to explain why the final score is so lopsided. Plainedge, which also came into the game without a loss, didn't exactly have an explanation." Shaver appealed the suspension, but was over-ruled by the lopsided score committee, which sounds like a parody from Saturday Night Live.

With its big lead, Plainedge continued playing starters and regulars, "running afoul of the sensibilities of the Nassau County lopsided score committee, which came down against a coach for the first time in the three seasons since the rule was unveiled," wrote USA Today's Cam Smith.

"Coach Shaver is an honorable, standup guy. He coached all three of my children, two who have gone on to play Division I athletics," a parent said. "This rule doesn't work. It hasn't worked elsewhere and it shouldn't be on Long Island."

A Plainedge player's father said, "I think the rule is ridiculous. It's not teaching them life lessons. It's a joke."

Pat Pizzarelli, executive director of Section VIII Athletics, the association that oversees middle and high school sports in the county, defended this indefensible rule. He said it was voted on three years ago as a way to keep scores closer and not embarrass the other team. In other words ... make everything and everybody equal, regardless of talent and work ethic.

"Their first team played in the fourth quarter… and I think that's what swayed the committee," Pizzarelli said. "Is it worth beating a team 70–0? Isn't 30 or 40 points enough?"

"I am all for treating everyone justly, but it is my opinion that Coach Shaver was 'done wrong' by this group of self-professed experts on sportsmanship. Who said they are experts on sportsmanship? Who appointed these people to run this kangaroo court, being the judge, jury, and executioners? I have knowledge that there are cases in Nassau County where the score was over 42 and this group took little or no action. But they suspended Coach Shaver? Sounds like something is wrong with their decision or they made it personal. The rule is not in place anywhere else in New York, not in Suffolk County, why in Nassau County? Connecticut tried it and realized it was a failed model and eliminated the rule.

"What are you teaching children by saying play fairly but now you are playing too well, don’t play anymore for the rest of the game. Where’s the life lessons? Of course we don’t want to embarrass others and we do that by moderating the players in the game. I’ve seen it numerous times over the years, by all our coaches, but especially by Coach Shaver."

Salina said Coach Shaver runs weekly academic study halls for his players and involves them in community service activities. At the requests of parents, he has personally met with many of his players at their homes.

"We are lucky to have a man of such incredible character working with our children and he has my 100% support and trust always," Salina wrote. "I have never met an educator more committed to teaching children life skills, both on and off the field."