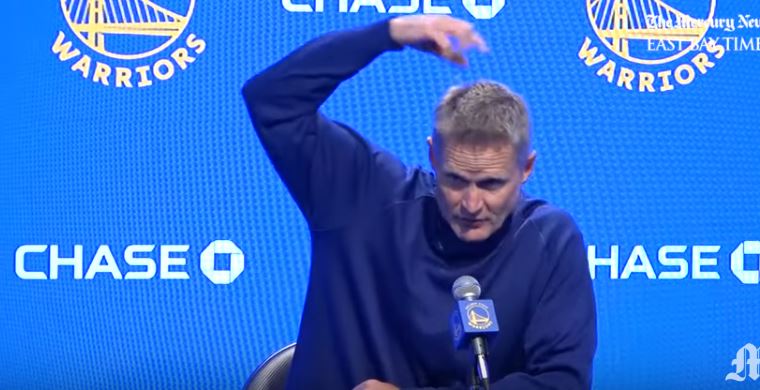 Earlier this week, Newsbusters' Gabriel Hays exposed Golden State Warriors' woke coach Steve Kerr for saying nothing about China's brutal crackdown on freedom-seeking Hong Kong citizens. "If only he would be as circumspect when gun control or Donald Trump are at issue,'' Hays wrote. No sooner said than done. In a Thursday press conference, Kerr gave China another pass, ridiculed President Trump and condemned America for abuses and gun violence.

Asked Monday for a comment on the China issue, Kerr simply said: "It’s a really bizarre international story and a lot of us don’t know what to make of it. It’s something I’m reading about just like everybody is, but I’m not going to comment further than that.”

Two days later the President blasted Kerr for his unwillingness to speak up against the Chi-coms' brutal suppression of free speech in Hong Kong and then punishing the NBA for blowback.:

Now Kerr's ready to talk, about Trump, America's human rights abuses and law-abiding gun owners who never shot more than a paper target at the range:

"No. Nor has (America's) record of human rights abuses come up either. You know, things that our country needs to look at and resolve, that hasn't come up either. So none of us are perfect, and we all have different issues. That we have to get to. And saying that is my right as an American. Doesn't mean that I hate my country. It means I want to address things, right? But people in China didn't ask me about, you know, people owning AR-15s and mowing each other down in a mall. I wasn't asked that question. So we can play this game all we want and go all over the map and you know there's this issue and that issue. The world is a complex place and there's more gray than black and white."

Kerr was surprised by President Trump's remarks. "You stop and you think, ‘This is just another day.’ I was the shiny object yesterday, there’s another one today, there’ll be a new one tomorrow. The circus will go on. It’s strange. But, it happened.”

That was Kerr's "thoughtful response to Donald Trump's criticism," wrote USA Today's Andy Nesbitt. Kerr regretted not riding into the press conference on a tricycle while wearing a propeller beanie (see photo above of Kerr pointing to his beanie-less head), writes Ryan Gorcey of the San Francisco Examiner.

“It is absolutely a tricky situation for all of us to be in ... the NBA is doing a lot of great things, in terms of helping to unify people in the world. The game itself is a unifier, and I think that’s important ... All of the sudden, that is meeting these political forces, and business forces and we are sort of thrust in the middle of it. Frankly, we don’t really know what to make of it ... this story has many vantage points, depending on where you’re looking from.

But when it's Trump and guns? Ding, ding, ding! Kerr is extremely comfortable on those topics! After all, he's personally involved with multiple groups that want to grab your guns. And he is more than qualified to speak about the Office of the President because he once visited the White House.

Kerr said, “The office held such dignity and respect, both from the people who were visiting and especially from the people who sat inside it. It’s just sad that it’s come crashing down, and that we are now living this ... ‘Wow, has the office sunken low,’ so my hope is that we can find a mature unifier from either party to sit in that chair and try to restore some dignity to the Oval Office again. I think it’ll happen.”