Outsports writer Jim Buzinski praised the Rice students for converting the halftime show into a pride event and for knocking the private Christian school from Waco, Texas, for calling its students to live biblical lives:

"Rice University’s Marching Owl Band spelled out 'pride' as people ran on the field waving rainbow flags at halftime of Saturday’s Baylor at Rice football game in Houston to make a statement of support for LGBTQ students at Baylor."

While demanding tolerance, the Rice band demonstrated intolerance and hypocrisy. Buzinski says the band "also tweeted out its thanks to everyone after the game for their support and ended a tweet with the hashtag #SpreadLoveNotHate.” 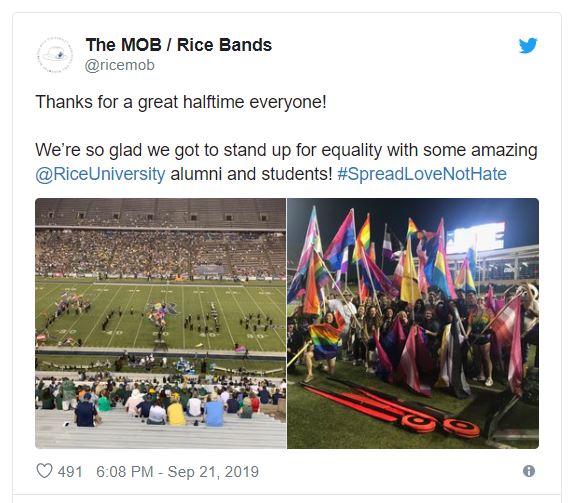 The band also played the LGBTQ anthem "YMCA" to rub the issue in the faces of Baylor fans. When the Rice band members indicated their protest plans, people on and off campus donated 70 rainbows flags to be waved out on the field at halftime.

Buzinski writes that the Rice band and rainbow flag-waving fans were demonstrating against a decision earlier this month by Baylor administrators who refused to recognize an LGBTQ student request for recognition as an official campus club. Baylor officials had cited the Christian school’s 'human sexuality' policy in rejecting the LGBT students' application. The policy reads in part:

"The University affirms the biblical understanding of sexuality as a gift from God. Christian churches across the ages and around the world have affirmed purity in singleness and fidelity in marriage between a man and a woman as the biblical norm. Temptations to deviate from this norm include both heterosexual sex outside of marriage and homosexual behavior. It is thus expected that Baylor students will not participate in advocacy groups which promote understandings of sexuality that are contrary to biblical teaching."

Buzinski says by not recognizing the LGBTQ student group, Baylor marginalizes these students by barring them “from accessing student activity funds or reserving campus space for meetings.”

During the anti-Christian halftime protest, the Rice University band urged Baylor “to reconsider your policy and support all your amazing students,” according to Buzinski.

Baylor's football team got the last word, though, winning 21-13 against the winless Owls.