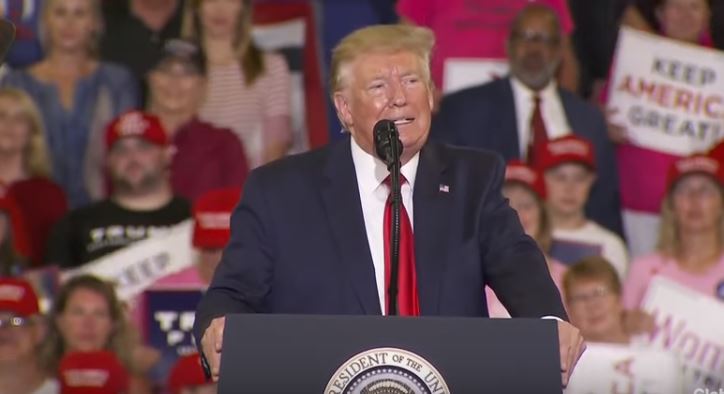 The Deadspin blog has been hating on President Donald Trump throughout his presidency, and today writer David Roth gave him a fresh, sarcastic blistering. In writing about Trump's brain and his sports-related remarks at a Monday campaign rally in North Carolina, Roth said the president has a "sulky childishness" and elevates landing the 2026 World Cup for America and his friendships with members of the New England Patriots above finding cures for cancer and AIDS.

Trump "deals in dark moods and tones and the highly debatable pleasure of his company," Roth says." At the political rally, his "powerful brain was deep in channel-flipping mode, but alighted briefly in some unexpected places.":

"There was a digression on the 2026 World Cup, which the U.S. won in June of 2018, but which Trump appears only recently to have learned about. Earlier on Monday, after meeting with FIFA President Gianni Infantino, Trump had told his classic joke about extending his second term or maybe adding a third what do you think, [emphasis in original] this time using the timing of the 2026 World Cup as his justification. ..."

The full experience of "Wet Trump" in "amphetamized mode" arrived when the topic turned to American football, Roth says. President Trump ignored his teleprompter script because, "You can do that shit in the Rose Garden. Wet Trump was in North Carolina to stretch out, which over the stretch of one thrilling minute meant going from the World Cup to Robert Kraft to Tom Brady to Bill Belichick to curing childhood cancer and AIDS in the next ten years. This was the real stuff, slick and shiny and lit up with the weird delight available only to someone who is convinced he just can’t miss."

Trump got wound up and then he wound on down, Roth said.

"He seemed excited about the World Cup, which is the biggest event and which we can now report exclusively 'we’re going to have a great relationship with' but he will forget all that soon if he hasn’t already. Robert Kraft, Tom Brady, Bill Belichick—those are some successful people he knows, geniuses all in their ways, and so he mentioned them. Cancer and AIDS—those are some things that many people don’t like, and we’re going to be looking into getting rid of them and actually getting rid of them very soon. Definitely, actually. That work starts tomorrow."

Trump meandered to the subject of boxing next. Roth relates how he spoke of a White House staffer named John Holifield and "then digressed to talk about how Evander Holyfield, who is his friend, was also a very tough fighter."

Roth sums up President Trump as highly detached and as someone who doesn’t really make news in the conventional ways that presidents have, because he doesn’t really do anything, but horrible things are happening on his watch:

"Things happen passively—truly horrible things, things that have already left deep and greasy stains on the nation—but less because of anything Trump himself does than because our state has been built to oversee and prosecute various normal horrors even while humming along in energy-saver mode. Trump himself mostly just goes on TV, and watches it."