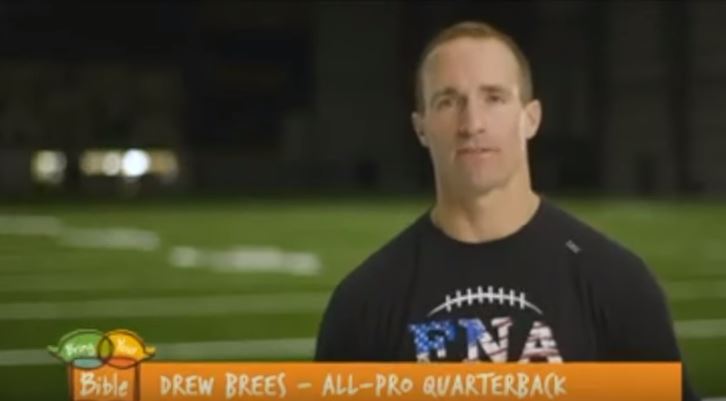 New Orleans Saints quarterback Drew Brees appeared in a Focus on the Family video last week to promote "Bring Your Bible To School Day," and that was waaaaay too controversial for anti-Christian media. They swarmed over Brees like angry bees for his association with Focus, stinging both with the "anti-LGBT bigot" label. The Washington Post, Deadspin blog, Big Easy Magazine and The Young Turks internet program led the smear against Brees and Focus.

On The Young Turks internet program, host Rick Strom blasts Brees for "sad religious ties" with Focus, which says same-sex marriage has no place in the context of a Christian worldview. Strom also refers to torture techniques used on homosexuals 70 years ago.

Deadspin writer Lauren Theisen, a male who describes himself as a transgender woman and a "queer blogger," slammed Brees and Focus on the Family for opposing Big LGBT. He calls them "gay conversion therapy sickos." He demands Brees must do better than this and disavow Focus.

Jenn Bentley of Big Easy Magazine writes — in potentially actionable libel — it's not surprising that Brees is open about his faith, but she incorrectly accuses Focus of the standard Big LGBT lie that conversion therapy relies on physical abuse to bring people out of homosexuality ...

"What is surprising is the anti-bullying advocate‘s (Brees) support of a religious group known to be one of the most well funded anti-LGBT organizations in the country. Focus on the Family supports and promotes the practice of 'conversion therapy,' which uses a combination of shaming, emotionally manipulative and traumatic stimuli, and physically painful stimuli in order to “cure” LGBTQ+ people of their sexual orientation. According to The Trevor Project, more than 700,000 LGBTQ+ people have been subjected to conversion therapy, in spite of the fact that the American Psychiatric Association (APA) discredited the practice and hasn’t classified homosexuality as a mental illness since 1973."

That reclassification was based on threats against the APA, not on science, says the founder of conversion therapy, Dr. Joseph Nicolosi in this video.

In the Washington Post, Allyson Chiu's headline cites Brees for appearing in a video produced by an "anti-LGTB religious group":

"Focus on the Family was founded in 1977 and is described by the Human Rights Campaign as “one of the most well funded anti-LGBTQ organizations in America.” The group has sparked outcry over its apparent support of “conversion therapy,” the discredited practice of trying to change a person’s sexual orientation or gender identity."

The Focus website lists referral services that do not engage in shaming, manipulative or shock therapy techniques, including the Restored Hope Network and The Alliance for Therapeutic Choice and Scientific Integrity. Organizations offering this kind of counseling only do so for people who submit that their same-sex attractions are unwanted.

Theisen, who also assassinated Tim Tebow's character for appearing in Focus's "anti-choice" Super Bowl commercial, characterized Focus as "once a key player on the wrong side of the battle for LGBT rights earlier this millennium. While their relevance has dipped as gay people have won more widespread acceptance in the U.S., their core views remain the same: no same-sex marriage, no same-sex adoption, etc. — you know the sort of bigots."

Perhaps most heinous of Focus on the Family’s anti-gay causes is the organization’s continued support of conversion therapy, the deeply wrongheaded and harmful idea that gay people can change, writes Theisen, looking right past Sheryl Swoopes, a former WNBA player who left the homosexual lifestyle, actress Ann Heche, and many others who did so without Christian "bigots" torturing them.

Brees denied that he is opposed to equality, leading Theisen to snarl: "Brees had a message for his critics: What? Me, bigoted? Me???" 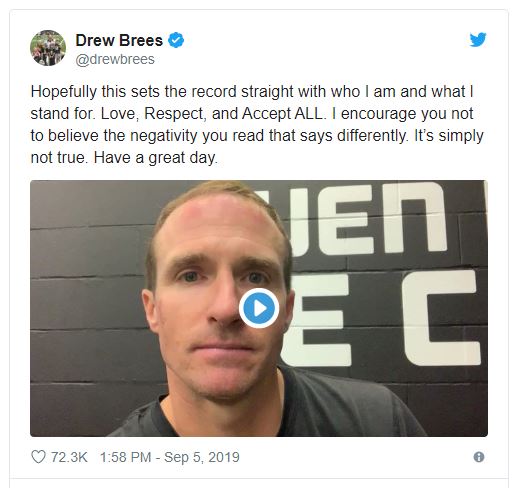 Theisen says Brees needs to find someone to tell him his video "'was produced by people who want to oppress gay people. Back away from it now.' Drew, if you’re reading, I’m telling you it right now."

Theisen wants the media to ask Brees if he "believes that conversion therapy can effectively end the homosexual threat? Does he believe in gay couples’ right to adopt and indoctrinate their children into the queer lifestyle? Does he believe same-sex marriage should be legal at all?"

Focus President Jim Daly emailed The Washington Post today and "denounced the blowback against Brees and praised the athlete’s 'ongoing support' for Bring Your Bible to School Day," Chiu reports.

“It’s unfortunate that mean-spirited antagonists have attempted to draw attention away from this event by mischaracterizing the beliefs and positions of our organization,” Daly said. “We must treat everyone with love and respect. In 21st century post-Christian America, the best and only way forward is to not poke ideological opponents in the eye but find ways to acknowledge and respect our differences.”