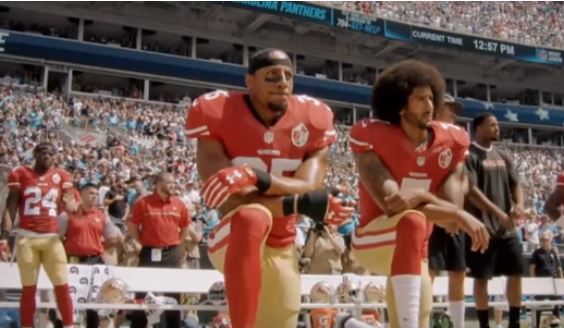 Kaepernick mania is beginning again. It's that time of year when NFL quarterbacks get injured, or retire as Indianapolis Colts quarterback Andrew Luck did Saturday night, and sports media are convinced that the notorious Colin Kaepernick is the ticket to the Super Bowl for the team that signs him. Or, as NBC Sports's Mike Florio implied, Kaepernick could potentially save the job of Carolina Panthers' head coach Ron Rivera.

On Friday, NBC Sports's Florio and Chris Simms discussed Kaepernick as a possible quarterback solution for the Panthers after starting QB Cam Newton injured his leg Thursday night. Florio said that Eric Reid, a 2016 San Francisco teammate who kneeled during the anthem with Kaepernick (Reid appears on the left with Kaepernick in photo) and who joined the Panthers' team last season, will lobby for a reunion with his friend:

"And, Chris, Chris, the name that's going to come up, especially with Eric Reid on that team ... Eric Reid is gonna sound the alarm. If Cam Newton is out for any extended period of time — just like Torrey Smith last year ... the Panthers' receiver who lobbied publicly for Eric Reid to be signed when the Panthers had a need at safety. I guarantee you that Torrey Smith and Eric Reid are gonna say, 'hey, it's time to bring Colin Kaepernick to Carolina and give him the chance to be the replacement for Cam Newton.

"I said two years ago when Cam Newton was recovering from ankle surgery, get Colin Kaepernick for the offseason program, have an understanding that once Cam Newton's healthy, you'll let him go, but at least it gives everyone a chance to see Colin Kaepernick is capable of showing up for practice and the franchise is not gonna disband the next day. So that's gonna be the next step in all this, I believe, if we find out that Cam Newton is going to miss anything more than a week or two."

Simms said he didn't think that will happen, but he expected people to clamor for Kaepernick. "From a pure football standpoint, it makes a lot of sense. He, really, he fits what the Carolina Panthers' offense wants to do. ... Colin Kaepernick, ding, ding, ding, has a similar skill set (to Newton's) as well."

Florio made the wild assumption that without Newton or Kaepernick available to the Panthers, it could threaten Head Coach Ron Rivera's job security. "(He) could have his job riding on how this season goes. On some level, you weigh distraction vs. termination, and maybe that becomes a factor for Ron Rivera if, and we don't know at this point."

Simms said the Panthers' owner would have to sign off on Kaepernick "because it is gonna bring an unbelievable amount of attention to the whole situation and everything like that." Florio aggressively disputed that assumption.

Sports Illustrated's Jenna West reported that the Panthers's Reid has already suggested Kaepernick as a backup for the injured Newton. Reid and Kaepernick both sued the NFL previously for allegedly blackballing them, and settled with the league out of court. Reid, who signed with the Panthers as a free agent last season, told reporters that Kaepernick could "come in and help us" if Newton's injury is serious.

West is impressed that "Kaepernick is staying ready in case a team calls him up. Earlier this month, he posted a workout video on Twitter showing his dedication to training at a high level. '5am. 5 days a week. For 3 years. Still ready,' he said."

The unattributed Heavy blog story said Luck's surprise retirement was causing some fans to speculate on the Colts's interest in pursuing Kaepernick.:

"Kaepernick implied he would like to have an opportunity to play football again via an August 7th tweet. Kaepernick posted a workout video noting he has been working out five days a week for three years. Kaepernick has not played an NFL game since 2016."

Heavy admitted the Colts previously passed on Kaepernick and are a long-shot for signing him to a contract now. Team owner Jim Irsay came out against anthem protests when Kaepernick started that detestable trend in 2016, "making a Kaepernick signing even more unlikely."

Nevertheless, the anonymous Heavy writer still held out hope that the notorious No. 7 will come bounding onto an NFL field in a Colts uniform. "It will be interesting to see what roster moves the Colts make moving forward and if Kaepernick is finally able to find a landing spot," the writer said.