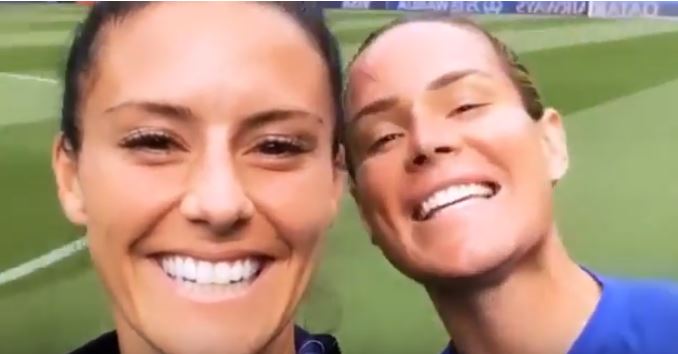 It's not enough that the LGBT-indoctrinated media are waving the rainbow flag in everyone's faces and crowing nonstop about the U.S. national women's soccer team winning the World Cup. Now one of the team's major media allies, Outsports, is going after Jaelene Hinkle, a Christian and one of the best defenders in women's pro soccer who refused to be a part of the national team's overbearing LGBT crusade last year.

Karleigh Webb's Outsports blog today cites team member Ashlyn Harris blasting Hinkle for saying in a 2018 interview with CBN the U.S. squad was "not a welcoming place for Christians." Harris (on left in photo), who is engaged to teammate Ali Krieger (on right in photo), tweeted:

Webb says Harris was responding to a tweet "by noted Catholic anti-abortion and anti-gay advocate Obianuju Ekeocha of Nigeria, who dusted off Hinkle’s June 2018 interview with CBN's 700 Club to again accuse U.S. Soccer of leaving her off the squad because of her Christian faith."

In the 2018 interview with CBN Hinkle said she refused an opportunity to play for the national team in 2017 because of its overwhelming LGBT identity, the rainbow-themed uniform particularly. The team's identity ran counter to her biblical beliefs.:

"I just felt so convicted in my spirit that it wasn't my job to wear this jersey. I gave myself three days to just seek and pray and determine what he was asking me to do in this situation... I knew in my spirit I was doing the right thing. I knew I was being obedient."

Also in 2018, the national team, coached by a woman (Jill Ellis) who's married to a woman, gave Hinkle a three-day "cup of coffee" of a tryout before booting her off the team. After that, the so-called "tolerant" world of women's pro soccer fans booed Hinkle relentlessly in a game at Portland. How's that for "bringing people together"?

In a second tweet posted in Webb's article, Harris wrote that Hinkle is an insult to the Christians on the national team (Tobin Heath and Julie Ertz):