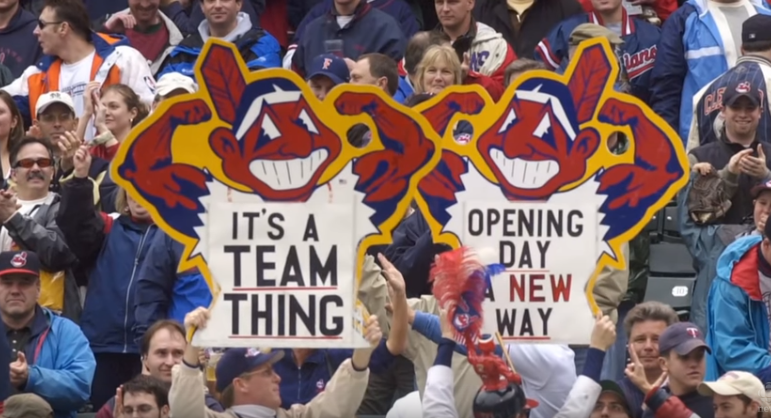 Sports nickname cops thought they had won when the Cleveland Indians agreed this season to stop featuring the smiling Chief Wahoo logo on their uniforms and caps. It's the grin that can make a grown-up snowflake cry. Though the chief has been confined to an off-the-field "reservation," the image remains omnipresent throughout the city, and with Cleveland hosting baseball's All-Star Game Tuesday, that really has USA Today writer Gabe Lacques hacked off. The angry journalist threw verbal spears at those fans who will keep the chief's memory alive Tuesday on one of baseball's biggest stages.
Lacques begrudgingly acknowledges that the chief's presence at baseball's 90th all-star game is unofficial, but "his beaming face a source of pride for some Cleveland Indians fans and a hideous, latently racist send-up of a Native American to the rest of us." National polling has consistently proven this writer wrong for thinking he's in the majority on this issue. Nine in 10 people are not opposed to Indian nicknames.
Two days ago, AP's Tom Withers noted that Indians fans are making sure the chief's smiling face is as visible as ever. Wahoo wear is still selling well in Cleveland:

"Look on the concourses and in the seats and Wahoo is on caps, jerseys, T-shirts, hoodies, tank tops, jackets and even baby clothing. For just $10, a red foam Wahoo finger can be yours.
"In some ways, he seems more popular."

It wasn't supposed to be this way when, in 2018, baseball's Commissioner Rob Manfred gained Cleveland's agreement to drop the old chief. The properly sensitive, the truly enlightened elites wanted Wahoo completely wiped off the face of the earth, but that hasn't happened.
Doing his best Bob Costas-style attack on the Native nicknames that inflict such excruciating pain, Lacques concedes "the larger war will bubble on, waged in a grim and toxic valley that separates those who believe 'political correctness' has run amok, and those more inclined to respect the wishes of the marginalized.
"It plays out on social media and at dinner tables and sometimes even face-to-face, those occasions when a war-painted lout comes face-to-face with, you know, an actual native American." The as-yet-unwoke louts consider the issue a "debate," but to Lacques it's really about distortions.
It's a distortion of history, "Where we view Native Americans not as indigenous people but rather savages infringing upon the destiny of settlers."
It's a distortion of tribal culture, "Where we view the customs, language and folklore of Native Americans through our lens, not theirs."
Also, it's a distortion of phraseology by the un-anointed who characterize opposition to Indian names as "political correctness." They're the people "who prefer the marginalized stay that way, who don’t hesitate to conflate the objectively absurd – 'What’s next, an emotional support goldfish?' – with pragmatic and meaningful progress, be it ramps for persons with disabilities or appropriate terms for those who’d rather they have some agency in how they’re defined." Costas could not have extrapolated a higher pile of hogwash.
This is about more than the Cleveland Indians, Lacques reveals. His "power rankings of objectionability" lists in order the Redskins, Indians, Chiefs and Braves. It boggles his mind that the “Redskins” nickname has lasted almost a century, birthed as it was by racist owner team owner George Preston Marshall. It's enough to make Lacques harken back to 1863 when a newspaper reported bounties were offered for “any red-skin sent to purgatory.”
Braves baseball fans doing the Tomahawk Chop, imported from Florida State's Seminoles, are also centered in Lacques' crosshairs. "Trouble is, does anybody know what they’re chanting? Is reciting what amounts to gibberish honoring a tribe? Or merely fulfilling your vision of what native peoples looked and sounded like?" Atlanta will host the 2021 baseball All-Star Game, and Lacques suggests MLB deputize the Braves as anti-chop cops.
As for Tuesday's Summer Classic in Cleveland, Lacques laments the fact that Indians' fans will adorn themselves with Chief Wahoo's face in an exercise to protect their turf — even it's not truly their turf.