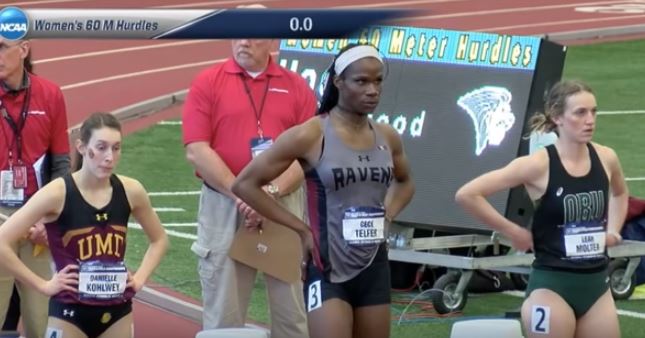 In an Outsports Exclusive, the LGBT publication tries to make the case that male transgenders dominating women's sports events really have no physical advantages over female foes. There's just one problem with the agenda-driven story: CeCe Telfer is an NCAA Division II national champion in the 400 meter hurdle.

“And there are people who say I have the benefit of testosterone," Telfer says. "But no: I have no benefit. I’m on hormone suppression, it doesn’t help.” Outsports' Dawn Ennis says Telfer "is the first publicly out trans woman to win an NCAA track & field title", then spins a lengthy narrative about how this "woman" doesn't always win.

Photos in the Outsports story show that Telfer is much taller and heavier than his female opponents, but he claims he's at a disadvantage against his smaller female rivals:

“First of all, my height, how tall I am, is a disadvantage, because the wind is hitting us so hard and the taller you are, the harder you fall, basically. There’s wind resistance.”

Ennis makes the laughable assertion that "Telfer is over six-feet tall, but if you attend a WNBA game you’ll find she is hardly the only woman of that height." The story is about track and field, not basketball.

The fact that the hurdles are so close. The distance between the hurdles is smaller in women’s competition. They are six inches shorter than in the men’s races, but more than half a meter closer together. And there are people who say I have the benefit of testosterone.... But no: I have no benefit. I’m on hormone suppression, it doesn’t help. It’s another disadvantage. Cis women are producing more testosterone than the average trans female...

Franklin Pierce track and field coach Zach Emerson says Telfer has lost muscle, weight, speed and explosiveness out of the starting blocks. His weight lifting abilities have also declined. The picture of Telfer towering over opponents, though, is misleading says Coach Emerson:

Never mind that those two girls beat her! This is a 60-meter dash and they beat her by over a quarter second. But that’s just the narrative, that just because she looks this way, the race is so unfair. That is every ringing bell of anti civil rights attitudes, between racism and transphobia and everything. It’s not only that, but that women should look some other way, as if black women should be weak

Nonetheless, Telfer won Northeast-10 Conference championships in the 60 meters, 200 meters and the 60-meter hurdles. He also-ran in the high jump and pentathlon. In other words he's a women' coach dream who scores a ton of points for the team.

"But as she racked up wins, the buzz surrounding Telfer spread to conservative right-wing and anti-LGBTQ fundamentalist Christian sites, with nasty headlines screaming about Telfer being 'born a man' who 'switched to female,' and is 'destroying women’s sports.'