Officials of the 100% Raw Powerlifting Federation said they were duped when a biological male registered for the recent women's competition in Charlottesville. The federation eventually stripped "Mary" Gregory of the world records he set that night, and now, according to a one-sided story by the Washington Post's sympathetic reporter Rick Maese, he is mystified that the governing organization insists on recognizing athletes by their birth gender.

Upon registration for that competition, Maese says Gregory, who has worked in the strength-building trade of carpentry, checked "'female' without hesitation." Gregory said, “I didn’t even think about it. That’s who I am.”

Gregory posted a picture on Instagram of herself holding a trophy after she won nine events and set master's and open division world records. "What a day, 9 for 9!” she boasted.'' Perhaps discouraged by the thought of competing against a man, no one else competed in Gregory's division. Nevertheless, his records bested anything a woman has ever done before in those divisions. 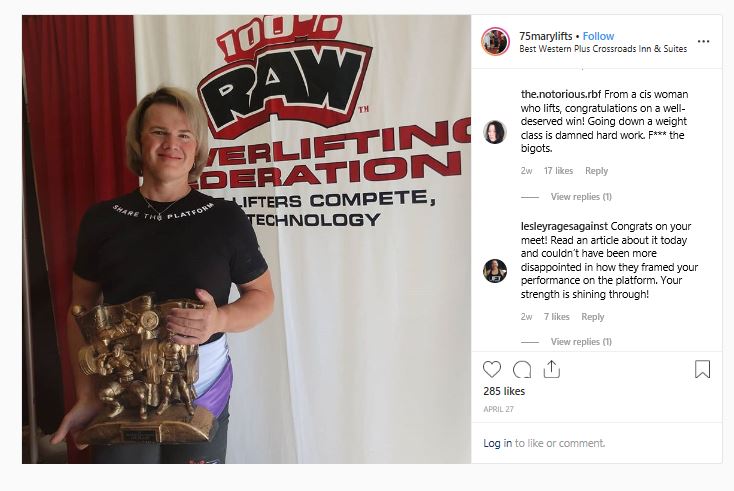 Federation president Paul Bossi said Gregory did not volunteer the fact he's a biological male, and his gender wasn't discovered until a drug test after the competition. “She put down female. Clearly, she’s not a female. Not biologically anyways. In our rules, we go by biological. According to the rules, she can only lift in the men’s division. … I’m not trying to hurt anyone’s feelings but I have to follow the rules. We could’ve rectified a lot of this prior had we known. In a way, we felt like we were duped.”

Gregory began hormone treatments last year and believes he should be allowed to compete as a female. “I felt like they were invalidating my gender and my identity."

Maese referred to the federation's disqualification causing a stir in the LGBTQ and weightlifting communities, but he failed to quote any of the women who are deterred by Gregory's intrusion into their sport. Typical. So often, there is only one side of the story told by media in any controversies involving LGBTQ subjects— the LGBTQ's side. He notes that transgenders are drawing the ire of opponents, including criticism from retired tennis star and lesbian Martina Navratilova, but that's all rooted in "ignorance," Gregory says.

Maese quotes Roger Pielke Jr., director of the Sports Governance Center at the University of Colorado, who tries to make a case that biology and reality are not as simple as male and female. Making a case for social engineering, Pielke says, "Society is obviously changing and evolving, and sport has to accommodate.”

This Post story also includes statements by Gregory, who's bulking up on estrogen and says he doesn't just show up as a man and dominate women's weightlifting. It's technique and a work "my ass off" commitment that helps him win. Not male brawn.

Maese's LGBTQ puff piece concludes that Gregory still has "her trophy" and a "sense of accomplishment doesn’t stem from any number or record. She said she will continue competing and will find events that allow her to check the 'female' box on the registration form."