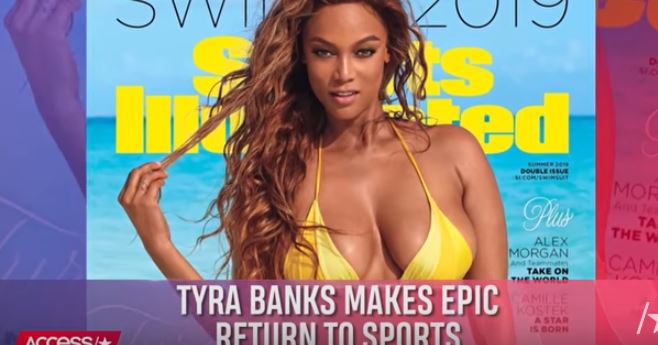 The idea of actually covering sports has become so passé for two iconic sports media organizations that they've devolved into a lusty competition to determine which can one-down the other in so-called artistic nudity. ESPN presents full buff arrays of athletes "performing" their respective sport, and Sports Illustrated is pulling out every PC trick in the book — hijabs and burkinis, painted ladies and politically correct subjects bearing virtue messages on their naked flesh — to gain attention. All in the name of progressive art moving sport and society forward toward the nirvana of diversity.

Just days ago, ESPN fired the latest shot in the woke/buck naked photo wars with its 2019 deviation from sport to hedonism. Seeking to maintain relevance, Sports Illustrated answers with woke, politically correct displays of flesh, only now with hijab- and burkini-clad, plus-sized and nude models adorned only with words like "tolerance" and "diversity."

Actress Hunter McGrady, the plus-sized model who appears tummy down in swimwear on a beach, tweeted: 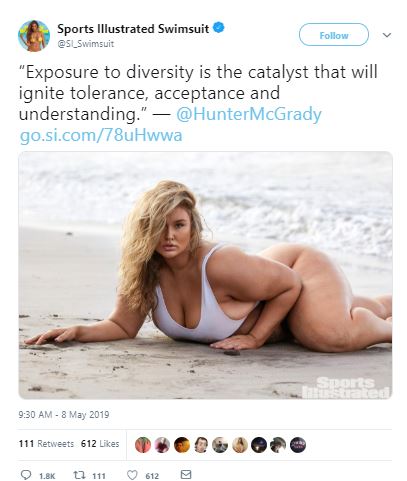 Yahoo lifestyle writer Kerry Justich says, "Hunter McGrady may be the “curviest model ever. But she wants her body-shamers to know that doesn’t mean she’s unhealthy."

InStyle magazine's Samantha Sutton interviewed McGrady and said she was "against hiding anything" with her "fierce repertoire of poses." “I just do what I feel is sexy — it’s never about hiding anything,” McGrady says, "praising how the magazine has embraced diversity over the years. 'It’s never about ‘Oh, let me tuck this in, let me do this, let me do that.’ I really want to showcase my body as it is. It’s so important that it’s prevalent in the images that are picked.” Despite the model suffering leg cramps, a full team of SI of photo crew members captures her "perfect moments."

"Hello, Hunter: Diversity in Media Is the Gateway to Tolerance and Acceptance," reads a Sports Illustrated headline. "Hunter McGrady weighs in on the importance of diversity in the SI Swimsuit issue and other traditional media outlets." The story goes on:

"Welcome to Sports Illustrated Swimsuit model Hunter McGrady's column, 'Hello, Hunter'. Through this platform, Hunter takes a long, hard look at some of the most frequently asked questions she receives in her DMs and answers them candidly. Body positivity? You bet we'll cover that. Dating, relationships, sex, finding confidence in a bikini — she'll take care of all of that, too."

It all seems so Saturday Night Live, but these people take themselves seriously!

SI found Hunter to be the perfect spokeswoman for trying to divert readers' attention from the fact that the magazine is leaving sports to the wind, wallowing in PC and starving for relevance:

"When we look closely at a magazine such as Sports Illustrated Swimsuit, a ubiquitous publication that has been so thoughtfully and successfully produced for decades, we notice that throughout the many changes both small and large that have taken place over time, SI has remained current, relevant, and deeply committed to reflecting the truth, changing world views and relevant narratives.

"Recently it was announced that the women in this issue would include such celebrated, talented and worthy women such as Halima Aden and Winnie Harlow, and it brought tears to my eyes."

McGrady noted the outrage sparked by bringing diversity to the forefront of conversation. She asked, "Why is it that a woman can’t pose in a burkini and a hijab without having a slew of negative comments? ... Exposure to diversity is the catalyst that will ignite tolerance, acceptance and understanding. Every generation has the opportunity to do something great to impact the world in a positive way. We will be the generation that shatters perceptions."

The conflicted messages of the 2018 SI "#MeToo" Swimsuit photos cannot go unmentioned either. That's when several women posed completely naked with words written on their bodies. Aly Raisman, the Olympic gymnast who suffered sexual abuse at the hands of former Team USA Dr. Larry Nasser, inconceivably disrobed for this issue. Her body was "tattooed" with the words "abuse is never okay," "live for you" and "trust yourself." She's figuratively saying "I was abused ... but look at my body!" Unbelievable. Another nude model displayed the word "nurturer." McGrady sprawled out naked on a floor exhibiting the words "fearless" and "confidence."

It's unclear how these examples of how SI, ESPN and their models are "igniting tolerance, acceptance and understanding" while stooping to the lowest common denominators to generate magazine sales and internet clicks.