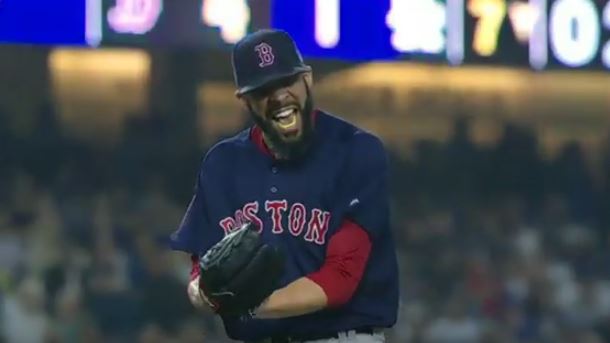 The World Series champion Boston Red Sox will be honored May 9 in a White House reception, and media bias is evident in stories preceding the event. In deriding President Donald Trump, Huffington Post, Yahoo Sports and People magazine have all sensationalized a small handful of Boston players who won't celebrate their championship at the White House.

Their stories imply that athletes are staying away because they reject Trump's politics and he's politicizing these events, but their stories do not deliver on the sensationalistic headlines. Fang opens her story:

"Boston Red Sox pitcher David Price (photographed above) said Thursday that he would not be participating in the World Series-winning team’s visit to the White House next month, joining several of his teammates eschewing the tradition, which has become highly politicized under President Donald Trump."

But what did Price give as a reason for not going? He cited “it's baseball season” as his reason for not attending the May 9th visit, according to a tweet by MLB writer Jon Heyman embedded in Fang's story. Fang also wrote that "Several other Red Sox players have announced that they will not go, including American League MVP Mookie Betts, Rafael Devers and Jackie Bradley Jr. The first did not specify his reason, and the latter two said that politics did not play a role in their decision."

Despite the head stating "several" players are declining the visit, just one player and the manager of the Bosox cited anything political.

Manager Alex Cora hails from Puerto Rico, and he had previously "condemned Trump’s antagonism toward Puerto Rico following the devastation of Hurricane Maria." Since the Red Sox won the 2018 World Series, Cora discussed “what kind of platform I’m going to have if I go,” pledged to “represent Puerto Rico the right way” if he decides to attend and also said, "Sometimes you’ve got to show your face.”

Hector Velasquez, a pitcher from Mexico, announced he won't attend the reception because he “would rather not offend” his Mexican fans. “I made the choice not to go because, as we know, the president has said a lot of stuff about Mexico. And I have a lot of people in Mexico that are fans of me, that follow me. And I’m from there. So I would rather not offend anyone over there.”

Bradley said a couple months ago "I don't get into politics" and he wasn't planning to go.

There's a lot of smoke in these stories, but not much fire, so the writers needed to find more "red meat." Fang wrote that championship teams regularly visit the White House, "but under Trump, the tradition has become highly politicized, with players sometimes overtly citing Trump as a reason to decline the visit."

Trump canceled team visits after the Golden State Warriors won the NBA in 2017 and after the Philadelphia Eagles won the 2018 Super Bowl, because very few players planned to attend. "Several members of the Stanley Cup-winning Washington Capitals declined to join their teammates for their White House visit, with some citing their opposition to Trump," Fang wrote.

The HuffPost writer also noted that "Trump has invited fewer women’s sports teams to the White House﻿ compared to his predecessors." Which is not surprising given the politics of several Women's NBA players who participated in the Women's March protests of Trump's election two years ago.

People's Hahn carried the anti-Trump line further, writing: "The tradition of professional sports teams visiting the White House after winning a championship has become a controversial topic during Trump’s presidency, as players and their organizations — affecting nearly every major American sports league — have had to address whether they would be accepting an invitation or not."

Do the stories back up the headlines? Or are the writers forcing their personal agendas on the readers?