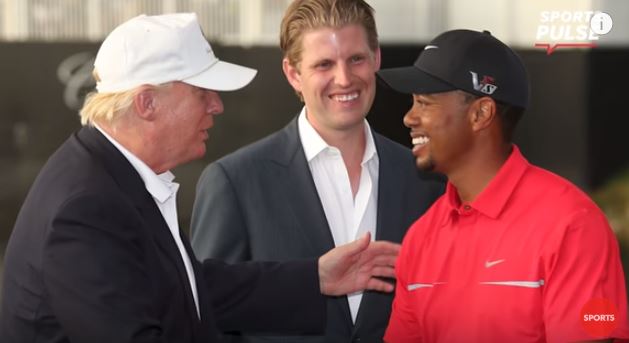 Tiger Woods, winner of the 2019 Master's golf tournament, is back — with a media-imposed asterisk. He's being advised that he must navigate his brand around his friendship with President Donald Trump. "Tiger Woods Can’t Be Apolitical in the Age of Trump and Kaepernick," writes Dave Zirin, the hard Left sports editor of The Nation.

Zirin writes of goosebumps at the sight of Woods raising his arms in victory Sunday at the Masters, in Augusta, Ga., "the most restricted of clubs in the most restricted of sports." After all, the course sits on a former antebellum plantation. But much has changed since his last victory at Augusta, namely that social justice warriors in the media now prefer their athletes to be fully woke and to exploit big sporting moments for big social justice causes.

"Back in 2005, it was still possible for Tiger Woods to play the role of the apolitical athlete: to be primarily a brand. Tiger, like one of his mentors, Michael Jordan, was a Picasso at the art of eliding anything of substance," Zirin writes.

Woods was then a trailblazing athlete who denied that his platform should include social commentary on racial oppression. Zirin faults Woods and Michael Jordan for resisting the social responsibility that Colin Kaepernick and other angry athletes have made fashionable in recent years.

Zirin calls 2019 the "shut up and dribble" era of Trump (something Trump never said; it was a Laura Ingraham line). The writer says it's now a tougher sell for athletes to not offend ticket-buying sports fans with SJW shenanigans, even though the overwhelming majority do not air their grievances in public with large captive audiences. Woods is also out-of-bounds with his Trump friendship:

"What’s more, Trump and Woods have been friends dating back to when Trump was just a reality-TV host and not whipping up white nationalists to threaten the life of a sitting member of Congress."

Woods committed the unforgiveable sin of saying: "Well, I’ve known Donald for a number of years. We’ve played golf together. We’ve had dinner together. I’ve known him pre-presidency and obviously during his presidency. He’s the president of the United States. You have to respect the office. No matter who is in the office, you may like, dislike personality or the politics, but we all must respect the office.” Way over the top for a hardcore radical like Zirin, friend of notorious athletes John Carlos, Tommie Smith, Kaepernick, Michael Bennett, et al.

Zirin would be shocked if Woods turns down President Trump's offer of the Presidential Medal of Freedom. Many athletes have chosen to "not respect an openly racist president who calls them 'sons of bitches' and brays for them to lose their jobs for the crime of protesting racism. Leading among them is the only athlete whose fame rivals Tiger, LeBron James." Zirin is unable to recognize Trump's anger as behaviorally and politically motivated, not guided by race. 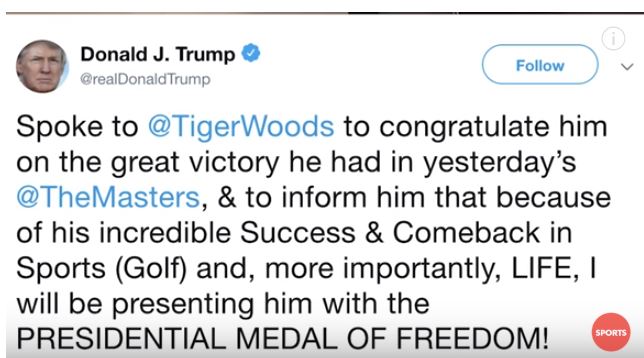 The liberal Obama-supporting athletes who have boycotted Trump's White House won't be used as "props" by this president, Zirin rants. Because he disrespects people of color, women, immigrants and the disabled.

"The list tragically is as long as the Twitter rants that stand as an ugly testament to his petty—and dangerous—hatreds," Zirin writes, adding:

"Accepting any honor or medal or even photo op from this administration is anything but an apolitical act. That’s the reality of the times we live in. Tiger knows it, but he will almost certainly make the calculation that an open refusal of Trump will be a political step too far. He is going to find out that acceptance—that being a prop for this administration—will be read just as politically."

Zirin has made a career of attaching political and social justice outrage to sports. As last year's Super Bowl in Minneapolis approached, he wrote: "There are real dangers for working people, immigrants, and people of color that come with hosting the Super Bowl. It’s the danger that arrives with a massive expansion of closed-circuit television surveillance, hyper-militarized policing and the free entrance of ICE into a space that normally is a 'sanctuary city'.”