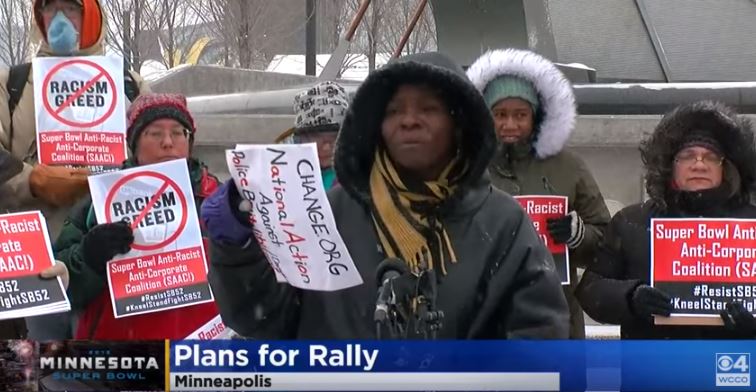 Social justice warrior and sports editor for The Nation, Dave Zirin is giving new meaning to "media day" at the Super Bowl. He disdains interviews of millionaire athletes and billionaire owners, preferring instead to highlight unions, fringe groups and others hoping to exploit the Super Bowl to gain attention for their pet social justice causes.

Zirin's latest rant concerns hot protests in the ice cold Super Bowl city of Minneapolis. He's giving voice to local unions and "a wide array of social-justice organizations attempting to be heard over the hype and din of Super Bowl week. ... Their battle pits them against the under-discussed economic and social trauma that the Super Bowl brings. Their plan is to "disrupt the narrative that what the Super Bowl arrives with is not only acceptable but something to be celebrated.'"

Veronica Mendez Moore, a representative of Twin Cities Centro De Trabajadores Unidos En Lucha (CTUL), told Zirin the Super Bowl is "about being against a corporate party that’s extracting from our communities and creating an environment of militarization, while increasing wealth at the top at expense of those at the bottom." To which Zirin adds:

"There are real dangers for working people, immigrants, and people of color that come with hosting the Super Bowl. It’s the danger that arrives with a massive expansion of closed-circuit television surveillance, hyper-militarized policing and the free entrance of ICE into a space that normally is a 'sanctuary city'.”

Local law enforcement not cooperate with ICE, so no reporting [undocumented people] to ICE agents. We’re also asking that sex-trafficking victims be treated as victims. We’re going to see, with the Super Bowl, an increase in sex-trafficking incidents…. And also we want the decriminalization of sex work, in general. We’re going to see an increase of violence to people who do sex work on a daily basis, because of the people, the misogyny, the toxic masculinity that these types of sporting events bring to our communities.

Michael Moore (no, not that Michael Moore, but the ideology is the same) labor editor of The St. Paul Union Advocate, told comrade Zirin that local unions and others in Minnesota have been organizing around the Super Bowl for weeks.

Transit workers authorized a strike during Super Bowl week to extract demands. St. Paul teachers taught their students grassroots activism by waging a social media campaign to shame corporate villains US Bank and Ecolab for spending $50 million to lure the Super Bowl and its billionaire owners to Minnesota, while dodging local taxes that would go to public schools. Bakery workers, retail janitors and fast food workers are demonstrating near the football stadium, demanding concessions and supporting racial equality and rights for illegal aliens.

These people are Zirin's heroes and they're "teaching the rest of us a hell of a lesson." It's a lesson that extends beyond the Super Bowl, too:

Whether it’s Super Bowl week in one city, or the way this Trump administration makes all of us feel like we are facing a fusillade of injustice from every possible angle, it can be difficult to know what issues upon which to focus and where to build the most effective citadels of resistance. But the young activists of the Twin Cities are practicing old-fashioned solidarity to knit together their different issues and push forward as one.

The word "forward" is an interesting choice of words coming from a hardened lefty like Zirin. It's historically been used by Marxists in reference to the long march forward past capitalism and on to socialism and communism. Former President Barack Obama used the code word, too.