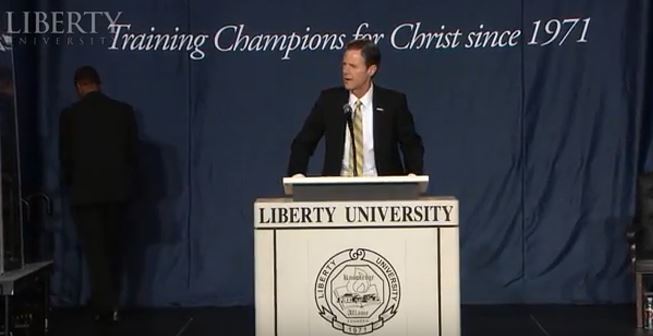 Two Christian universities with men's basketball teams in the NCAA Tournament this week have become punching bags for intolerant left-wing blogs. At the start of the week, the Outsports LGBT blog heaped hate on Liberty University and Abilene Christian University for standing on faith in opposition to a radical anti-Christian agenda. Then on Thursday, a Deadspin podcast turned the same two schools into piñatas during their "Hater's Guide to March Madness."

During its “Deadcast,” Deadspin’s Drew Magary and David Roth, along with guest and “teen blogging prodigy" Gabe Fernandez, “used the NCAA Tournament as an excuse to get really judge-y,” Roth writes on the blog site. The trio applied a so-called “Hater’s Guide format” to select the single most loathsome team in this year’s Field of 68.

Spoiler alert: Liberty, the university founded by the late Jerry Falwell, got the overall No. 1 hate seed.

It’s difficult on this audio podcast to distinguish between the voices of Magary and Roth, but both expressed equal contempt for faith-based universities. The two co-hosts agreed they “damn well” knew who’s the more hateable of a first-round tournament matchup of Liberty and Mississippi State, but they asked Fernandez for his opinion.

The guest blogger Fernandez said, “I’m gonna go with the evangelical base of Trump’s election, Liberty University. Bold, sorry to put that out there.”

“Hard to believe. Liberty may be the most repelling program in this tournament,” the co-hosts responded, along with these comments:

“It’s gonna be hard to out-hateable equally hateful bias, starting with the first-round game pairing Liberty and Mississippi Liberty. They’d (Liberty) get Duke in the Elite Eight, after all that talk about how Duke is obviously gonna win, and I don’t recall Duke’s president endorsing Donald Trump and then continuing to show up at fuckin’ CPAC (as Liberty President Jerry Falwell Jr. has done).”

A Deadspin co-host pointed out that Washington, D.C., will host an Elite Eight game and asked the panel to assess the chances that President Trump would show up if Liberty makes it that far.

“Zero. Yeah, he’s not going,” one panelist responded. “I was talking to a friend today about this. If he (Trump) were to fill out a bracket like Obama always did and (ESPN college basketball analyst) Jay Bilas was there and goes ‘great choice, sir,’ and if Trump did it he would take three hours and he wouldn’t pick any teams. You know like, ‘I think Air Force is gonna win it … superior air power’ and that would be the whole tone of it.”

Another panelist said Trump would not attend any event he can’t control.

The hosts asked who was the more despicable of the tournament's first-round match-up featuring Kentucky and Abilene Christian University. Fernandez admitted that he had looked at Abilene Christian's home page and the second sentence he read was over the top:

"'We aim to transform our students into the likeness of Jesus and produce leaders who think critically and globally and missionally through distinctive and innovative programs that deliver a unique, Christ-centered experience that draws students into community.' That is how they sell that."

Two of the three men ridiculed Abilene Christian's aim to provide a Christ-centered experience and mockingly said they try to sell their Deadcast as that, too. One likened the mission statement to the "battle for the soul of the Republican Party." Another said he wouldn't necessarily rule Abilene Christian the most hate-able school based on faith alone because he hates Kentucky and its coach John Calipari.

In concluding, the Deadspin podcast selected Liberty as the most despicable team in the entire NCAA Tournament. One justified this by saying "Liberty's gross, not just because of President Jerry Falwell Jr., (in photo above) but because (its) expanding online degrees are like business fuckery. They're a hustle, a grift. Liberty sucks. It's Liberty for me as the most disgusting team in a disgusting tournament."

Roth also mentioned in the blog describing the podcast that "slapping a question about Trump’s prostate or whatever onto the end of a discussion that already had so much Jerry Falwell Jr. in it seemed rude."