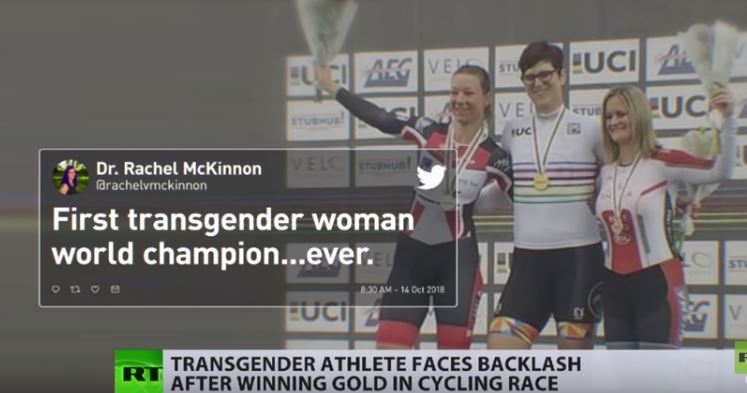 To help us sort out the tumult caused by a recent outbreak of "transphobia," The Nation's radical lefty sports editor Dave Zirin and a biology-challenged cast of woke "gender experts" are disparaging critics of the growing transgender movement in sports. They claim that confused, angry cis-genders are spreading misinformation about what it means to be trans and how "sexed bodies" operate in the world.

Transphobia is a raging, three-alarm blaze. Especially since two boys, Terry Miller and Andraya Yearwood, recently won sprint championships in Connecticut's girls state track championships. Adding to the controversy, male-born Rachel McKinnon of Canada (photographed above) won a women's world cycling championship, and Martina Navratilova cried foul over males migrating to women's sports. The LGBTQ+ juggernaut, aided by Zirin and his friends, are trying to douse the flames of transphobia from their exalted perches of "wisdom" on gender and biology. Zirin starts with assurances that the big muscular boys Miller and Yearwood are indeed girls:

"The Daily Caller, Tucker Carlson’s pet white-nationalist website, posted an article (forgive me for not linking to it) that crudely misgenders both Miller and Yearwood in its headline, 'Male Runners Continue Dominating Girls’ High School Track In Connecticut.' It has been shared tens of thousands of times, helping to advance the idea that young trans-women—whom The Daily Caller identifies as 'male'—are invading girls and women's sports. First it was bathrooms, now it’s athletics."

Zirin is right. When McKinnon appears in the women's restroom and on their victory stand, it is an "invasion" — against biology, commonsense and fairness to females. The stubborn Zirin tries to deflect such criticisms with his cast of gender-bending activists. He starts with an ACLU trans activist, Chase Strangio, who says:

“Over the past few weeks we have seen an escalation in rhetoric surrounding trans athletes competing in sports consistent with their gender. The anger directed at these athletes—many of whom are children—is largely being driven by people who have never spent a day in their lives advocating for women’s sports now claiming that trans girls and women competing is violating the integrity of women’s sports."

Strangio says Navratilova and others are responding "out of fear and misinformation about what it means to be trans and how sexed bodies operate in the world. I urge people to exercise caution before attacking trans athletes as many people are being swept up in the polemics of those [like The Daily Caller’s] who would prefer that trans people not exist at all.”

To LGBTQ+ activists and their media lackeys, opposition is always fear-based. It's never a matter of reason or concern for the people who are confused about their sexuality.

Zirin's parade of social engineers spewing biologically challenged madness continues as he calls on Dr. Nicole LaVoi, director of the Tucker Center for Research on Girls & Women in Sport. Her role in Zirin's post is to demonstrate how ignorance fuels the fires against trans athletes:

“Unfortunately, the backlash surrounding both athletes is in part due to lack of education and factual knowledge about transgender individuals. Both girls (the 'sexed bodies' operating in the world of Connecticut) are on hormone suppression, which negates any competitive advantage due to testosterone, but most people are unaware of this fact (maybe because Miller, with Yearwood in close pursuit, blew away the smaller, weaker females in state record time)."

LaVoi says many factors go into athletic performance, including "physical training, conditioning, dedication, motivation, quality of coaching, nutrition and psychological skills that get erased when the sole focus is on gender identity and hormones.” With more dedication and better nutrition, the girls might eventually relegate Yearwood and Miller to also-ran status. Makes sense.

Calling on yet another expert in the "art" of gender bending, Zirin summons forth Dr. Katrina Karkazis, co-author of the forthcoming book Testosterone: An Unauthorized Biography. She says the claims that trans athletes hurt cis-women and cis-girls belies the truth of the cisterhood: "trans women are in fact women. The fundamental argument of The Daily Caller and its ilk erases this reality in the ugliest possible fashion."

“Sport is one of the worst domains for institutionalized discrimination against trans people," Dr. Karkazis complains. Conversations about fairness are steeped in paternalistic language around "protecting female athletes." Which is inherently a sexist view that "female athletes are always inferior to male athletes so we must police women’s sports in order to protect women." But it turns women against each other. "Additionally, we continue to see an overemphasis on biology, and especially hormones, as the dominating factor in athleticism which we know is not the case." Of course! It's all about dedication and nutrition, not biology!

Dr. Karzakis frees up politically correct, woke biology from its scientific constraints. She says, “There is space here for a nuanced conversation about how we understand fairness in sport, but instead we’re seeing transphobia animated by erroneous beliefs about biology and gender. Far from centering inclusivity, these conversations promote deep misunderstanding about gender identity and will further discrimination towards trans athletes.”