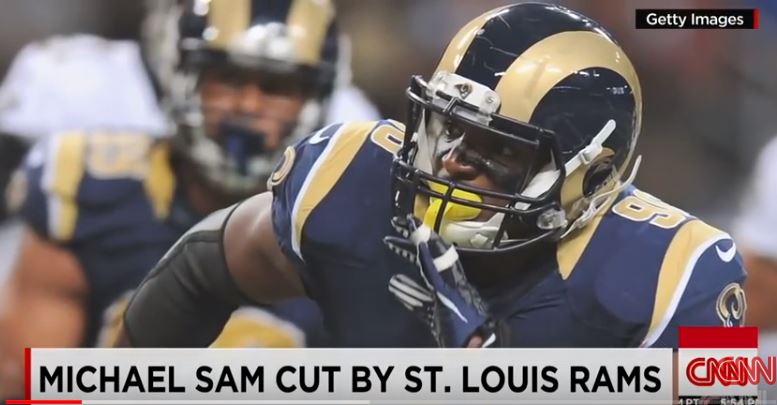 Each year the Super Bowl features numerous side events, and last month's game in Atlanta included one designed to combat the so-called "problem" of sports providing a "homophobic space." "Don't-Stick-To-Sports-Illustrated" writer Jenny Vrentas tells us how this came down in her story, "NFL, the Queer Community and the Quiet Path to Acceptance".

Vrentas gave a play-by-play of former NFL player Wade Davis's ongoing work with the league as an "LGBT inclusion consultant." If you think a men's pro football league sidetracked by a focus on lesbians, gays, bisexuals and transgenders is odd, think again. This is a league whose commissioner, Roger Goodell, spent several hours last summer at a bail bond hearing for a Louisiana man charged with armed robbery. This is a league that gave $89 million to social justice activist players. And several million more to shake-down artists Colin Kaepernick and Eric Reid.

In Atlanta last month, four days before Super Bowl 53, Davis, who as an active pro player "struggled with internalized homophobia," is now reforming his ways by telling those at the inclusion meeting not to stay in the closet like he did:

“Hi, I’m Wade Davis. I’m a former NFL player. I’m also an openly gay man. While in the NFL, I wasn’t out about my sexuality. Part of my responsibility now is to work with organizations like yours and to partner with the NFL to create the conditions where we start to change the narrative that sports is a homophobic space.”

In the audience were 30 teens and young adult clients of CHRIS 180, an Atlanta-based non-profit that offers housing, counseling and other social services to help individuals facing challenging circumstances to get back on track. Most are homeless and many are LGBTQ+. This is a "Hi-Five" event, a partnership between the NFL and the You Can Play Project to make LGBTQ+ youth feel welcomed in the sports community. The NFL had previously done this high-fiving at the Pro Bowl and at the NFL draft.

Major themes of Vrentas's story are former NFL players who came out of the closet after retiring and griping about Michael Sam (seen in above photograph), the gay player drafted by the Rams in 2014. The NFL now has a straight eye for the queer guys. Ryan O’Callaghan, "the former Patriots and Chiefs offensive lineman who struggled with painkiller addiction and suicidal thoughts before a psychologist who worked with the Chiefs encouraged him to start coming out as gay to people close to him." Also speaking in Atlanta were Esera Tuaolo, a defensive lineman who came out after he retired from the NFL and former fullback Tony Richardson, an ally of the LGBTQ+ community.

Vrentas writes that it’s been five years since Sam got selected during the NFL draft. He never played in a regular season game and he quit a Canadian Football League team, leading to anger and depression. She says the NFL has not had another publicly gay player since Sam, but it's cool because 49ers' assistant coach Katie Sowers is gay!

In Atlanta last month, Davis complained that if an active player comes out he immediately becomes a “gay NFL player. Michael Sam is a 'gay NFL player'—no, Michael is an NFL player who is also gay … Imagine I am taking this identity you have had since you were 7, and now I changing that and saying, ‘Oh, you are that gay NFL player.’ How many of us would want to do that?”

Davis mentions the possibility of an NFL player saying he's uncomfortable playing with a gay guy, and asks, “Can we not have space for this player to grow, to evolve ... ."

No one connected to the NFL is spared from this indoctrination effort — not even the referees. Those teams who are asking potential draft picks about their sexual orientation have got to be re-educated, too.

Davis, an African-American man, says people of all races and religions are afraid of homosexuals: