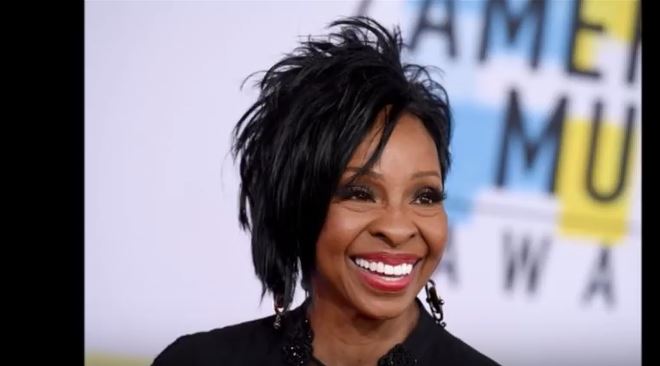 The "War on the National Anthem" has gained a significant new opponent: Gladys Knight, the high-profile African-American entertainer who will sing The Star Spangled Banner at the Super Bowl in Atlanta next month. Knight, a seven-time Grammy Award winner, says she will restore the voice of the anthem and attempt to unite America, which has been torn over anthem protests started in 2016 by former NFL player Colin Kaepernick. Knight is standing up to the criticism she's receiving, too.

Kaepernick and his friends have been waging a campaign to discourage entertainers from performing at this year's Super Bowl. In this anti-anthem climate, Knight, aka the "Empress of Soul," courageously wrote the following message to Variety magazine:

“It is unfortunate that our national anthem has been dragged into this debate when the distinctive senses of the national anthem and fighting for justice should each stand alone.

“I am here today and on Sunday, Feb. 3, to give the anthem back its voice, to stand for that historic choice of words, the way it unites us when we hear it and to free it from the same prejudices and struggles I have fought long and hard for all my life."

Knight noted that Kaepernick is protesting two things, police violence and injustice. Nevertheless, she contends his protest, adopted by other athletes, some of whom are still kneeling during the anthem, is misguided:

“No matter who chooses to deflect with this narrative and continue to mix these two in the same message, it is not so and cannot be made so by anyone speaking it. I pray that this National Anthem will bring us all together in a way never before witnessed and we can move forward and untangle these truths which mean so much to all of us.”

Dave Zirin, hard left sports editor of The Nation, wrote, "A symbolic picket line has developed around this year’s Super Bowl halftime show in Atlanta in solidarity with Colin Kaepernick." Kaepernick, who sued the NFL for "colluding" against his playing in the league, and his allies have been working for months to undermine Super Bowl entertainment.

The Chronicle's un-bylined story reported: "Several high-profile artists, including rapper Cardi B, said they would not be willing to perform at this year’s Super Bowl, in a show of solidarity with Kaepernick." Rihanna is another of those entertainers boycotting the Super Bowl. The halftime acts will include Maroon 5 and rappers Travis Scott and Big Boi.

Scott faced major backlash for agreeing to perform, from Rapper Jay-Z and others. Variety reported that Kaepernick disapproves of Scott's decision to perform and the two had a cordial phone discussion about it. There is no cordiality, however, on Kaepernick's Twitter account, which includes several posts ripping Scott. Nessa Diab, his girlfriend, slammed Scott as a sellout who sacrificed artistic integrity to promote his career, along with this nastygram: 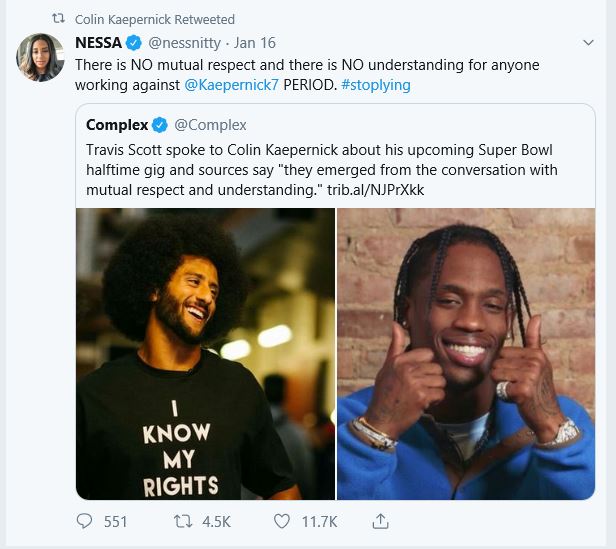 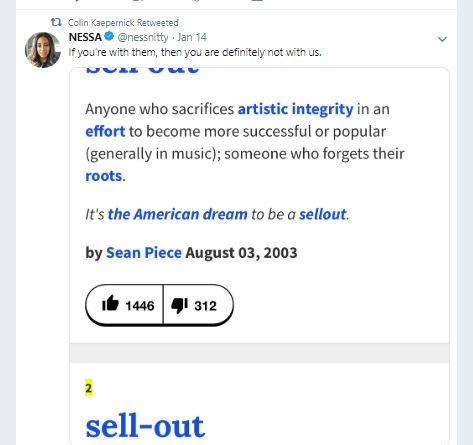 Knight, 74, an Atlanta native and a longtime civil rights advocate tweeted, "Atlanta, I’m coming home! #NFL #SBLIII." She told Variety, “I have been in the forefront of this battle longer than most of those voicing their opinions to win the right to sing our country’s anthem on a stage as large as the Super Bowl.”

Twitter critics wrote: "Gladys Knight is now against Colin Kaepernick." "HUH? THIS IS A FOUL MOVE BY HER AND THE NFL! SAD! A SELL-OUT ( GLADYS KNIGHT) PATHETIC TO JUST DESTROY COLIN KAP EFFORTS! AND STRUGGLES!" Yet another critic hopes Knight will wear a @Kaepernick7 shirt when she sings the anthem.