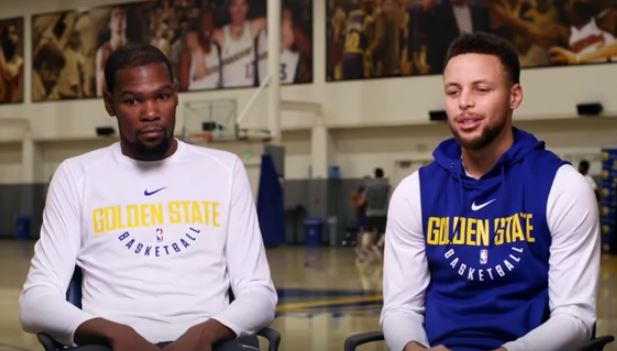 For a few years now, social justice activism has been used to determine Sports Illustrated's "Sportsperson of the Year" award. The Golden State Warriors' entire team is this year's winner, and though they've won three NBA championships in the last four years, that simple fact didn't seem to weigh heavily into SI's decision. "Matters beyond basketball" did, according to Alaa Abdeldaiem, a breaking news writer at SI.

In the past, on-field success was the criteria for winning this distinction. That's how it was in recent years when San Francisco Giants pitcher Madison Bumgarner, tennis star Serena Williams and NBA Finals MVP LeBron James won. But look at what Sports Illustrated writers base it on this year:

Abdeldaiem: "In awarding Sportsperson of the Year to the Warriors, SI is also recognizing the team's franchise-wide commitment to service, community and the importance of taking a stand on matters beyond basketball."

The editors of Sports Illustrated: "The rise of the Warriors has coincided with the restoration of the NBA as a leading edge of culture that recalls the league’s prolonged boom, which began with the Magic-Larry years in the 1980s and continued through the Jordan-dominated ’90s. The current boom, too, has coincided with the increasing intersection of sports and the hard questions of politics, race and identity, among others, that have so divided the country. The Warriors—forcefully but civilly—embraced the unique platform afforded them. No, they did not change the world and its attendant conflicts and ills, but they did not ignore them either."

A division of ESPN, The Undefeated blog, had previously branded the Warriors (see photo of Kevin Durant, left, and Steph Curry above) as the "wokest team in pro sports." Lonnae O'Neal and Marc J. Spears have said that "the Dubs are not simply basketball superstars, they might just be the most progressive—the most woke—team in the history of professional sports." The Undefeated writers described the Warriors as a team that talks politics and issues on practice days: "It’s a little Woke U in front of the TV where they watch game film, a spur-of-the-moment conversation guided by the events of the day and the passions of those who feel like speaking up."

The Warriors head coach Steve Kerr is animated about gun control more than anything, according to The Undefeated. He and star players, including Durant and Curry, also support Colin Kaepernick's anti-American protests. Durant lobbied for the Washington Redskins to sign the free agent quarterback who brought disrespectful protests to the NFL. Durant and Curry each donated $10,000 to Kaepernick's million-dollar pledge to charities (which included one donation to an abortion organization).

Durant says the Warriors "are kind of carrying the torch for being the socially conscious team." He also said he would not attend a championship celebration at the White House of Republican President Donald Trump because "I don't respect who's in office right now." Curry has called Trump an asset "if you remove the et," and opposes American sovereignty, criticizing policies to protect the border.

Additionally, Curry opposed North Carolina's bathroom bill, a law that resulted in the NBA and the NCAA pulling basketball events from the state in 2016. That law was designed to protect women and girls from potential threats by males using public female restrooms.

You get the picture by now. The Warriors are a great, great basketball team. But according to Sports Illustrated and like-minded, biased media, it's being woke that matters most.