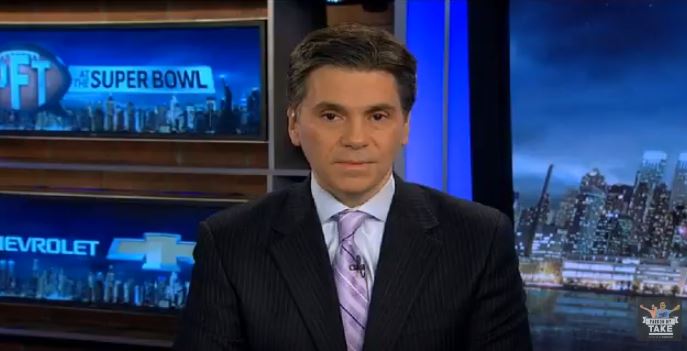 When Washington Redskins' quarterback Alex Smith went down with a nasty, season-ending injury Sunday, all appeared to be lost for the NFC East Division leaders. Not so fast, say a host of Monday morning quarterback sports writers who ignited the latest in a never-ending series of Colin Kaepernick eruptions. If Kaepernick could just get a chance to play for the Redskins or another team in need, they say, the notorious anthem kneeler could save their season. Possibly even lead them on a magical Super Bowl run.

Here's a countdown of the most lame reasons the Kaepernick media apologists came up with Sunday and Monday to try to justify his return to the league he's suing for collusion.

Ryan Wilson of CBS Sports examined the idea of Washington bringing in the SJW favorite, Kaepernick, then shot a hole in his story by saying the team has made it known it's not interested in Kaepernick. Oh well, a Kaepernick mention is worth extra internet clicks for an NFL beat writer using the Kaepernick name in a headline.

4. Former Heisman Trophy winner and NFL player Charles Woodson says Kaepernick should be in the conversation.

TMZ sent a video team to walk an airport terminal with Woodson and ask if Kaepernick should be picked up by Washington. Woodson said, "I don't think he will be picked up, but he definitely should be in the conversation. ... He's doin' a great thing regardless. He'll be fine." That was ... enlightening.

3. Kaepernick had a pretty good game at New England six years ago!

"Back in 2012, Kaepernick became the youngest quarterback to win a regular-season game in New England, as the then 25-year-old threw for 221 yards and four touchdowns in the 41-34 win at Gillette Stadium."

Yahoo's Jason Owens one-ups Phillips by pointing out that "before the chorus of Kaepernick hate begins," he had a memorable season in 2016. No, it wasn't Kaepernick's 1-10 won-lost record; that was hushed up. Instead Owens pulled out obscure stats from 2016 that could have NFL owners re-thinking their anti-Kaepernick positions. He averaged 7.2 yards per pass attempt and 6.8 yards per rushing attempt in his final season of play! Washington, wanna pass on Mark Sanchez, the successor to Smith? Owens belittled Sanchez because he's "best known for the butt fumble ... ," and adds:

"Kaepernick is not a superstar. But he’s a very good quarterback who would gladly be welcomed to a contending team in need of quarterback help in normal circumstances."

1. Kaepernick is working out and wants to play!

NBC Sports' Mike Florio (in photo above) reports, "He continues to work out five hours per day, six days per week for one reason and one reason alone. He wants to play." Kaepernick's girlfriend was so moved by this profound statement that she tweeted how much she loves factual stories like this one. For drawing this Twitter response by Nessa Diab, Florio earns the No. 1 spot on the list. 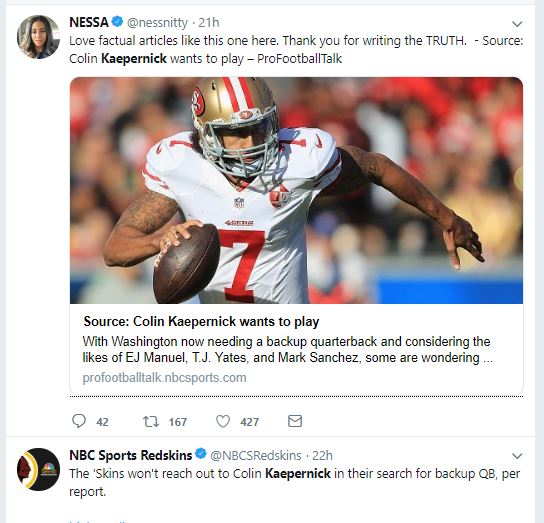 To left-stream media, all of these pithy powder puff arguments are actually considered powerful entries on a social justice warrior's football résumé.

But to objective people, these are flimsy, pathetically weak points. Beating a dead horse, the Kaepernick apologists are embarrassing themselves by begging and pleading for his return.