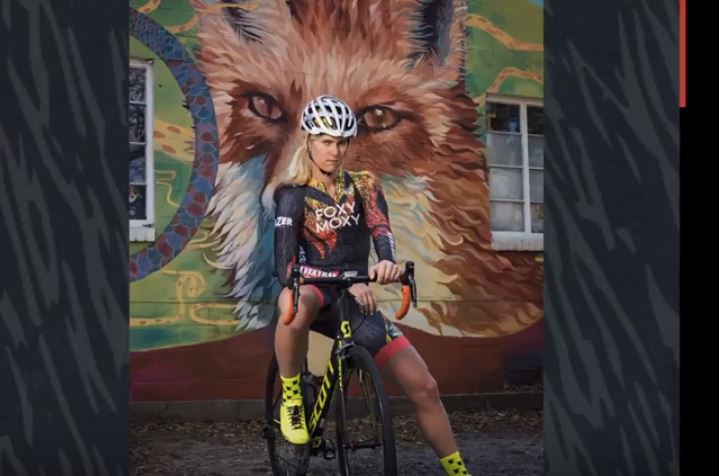 The winner of Sunday's 2018 UCI Women's Masters Track Cycling World Championships in Los Angeles towered over the runners-up on the victory stand. Silver medalist Carolien Van Herrikhuyzen of the Netherlands and bronze medalist Jennifer Wagner of the U.S. never had a chance against gold medalist Rachel McKinnon, a biological male of superior height and leg strength.

Far be it for McKinnon to apologize to the smaller, weaker women "she" dusted in Sunday's race. “First transgender woman world champion…ever,” McKinnon boasted on Twitter. McKinnon teaches philosophy at the College of Charleston and is a radical activist for transgender rights. She co-founded the cycling team Foxy Moxy, whose motto is: "Racing bikes, radically promoting trans and gender non-conforming in sport:

“We cannot have a woman legally recognized as a trans woman in society, and not be recognized that way in sports.

“This is bigger than sports, and it’s about human rights."

McKinnon, the dude who looks like a lady, also compares the struggle for transgender rights to racial segregation ― an affront to African-Americans ― and said white people were probably "pissed" over integration with African-Americans, but they learned to deal with it.

The message? So what if legitimate female athletes have to take some losses if it results in LGBT gains!

McKinnon isn't alone in the male-beating-females in sport events category. Biological boys beat out girls for girls' state track and field championships in Connecticut. A testosterone-injected girl, Mack Beggs, won her last 92 wrestling matches against rivals who wrestled without performance enhancing drugs. Beggs is now a walk-on on the men's wrestling team at a Georgia college. The hopes and dreams of girls to win championships are taking crushing blows for the LGBT cause. But the agenda is larger than just stealing female championships. McKinnon and others want to confuse your kids about their birth gender, too.

Offering further evidence of McKinnon's radical crusade for transgender rights, the blog site 4thWaveNow, "a community of parents and others concerned about the medicalization of gender-atypical youth and rapid-onset gender dysphoria (ROGD)," reports this:

"McKinnon 'has a YouTube message for all you cisnormative, unsupportive moms out there: Get with the trans-activist program, or risk losing your kids to the 'glitter-queer' family of adult trans waiting with open arms.'

"(O)on Reddit, YouTube, Tumblr, and other online fora, 24 hours a day, 7 days a week, tweens and teens will find plenty of trans adults like McKinnon, eager to take them under their wing."

USA Today, a blatant mouthpiece for the LGBT agenda, reported early this year that McKinnon has her sights set on the Olympics. The presence of a biological male competing against women on the international stage of the Summer Games would magnify the controversy ― especially if a biological male wins a gold medal. Perhaps that is what it will take for women ― real women ― to rise up in opposition to a movement that threatens to relegate them to permanent also-ran status in athletic competition.