Retired football superstar Herschel Walker (second from right in photo) has expressed disgust with CNN for not firing Don Lemon, Bakari Sellers and Tara Setmayer after their "despicable" remarks about rapper Kanye West's (second from left in photo) White House meeting with President Donald Trump. The Washington Times and Fox News are among the very few covering this story, but most networks are ignoring Walker's remarks.

NewsBusters previously reported that on Tuesday's embarrassing segment of CNN Tonight West was deemed a mentally ill "attention whore" representing "what happens when negroes don't read. The CNN trio also accused West of staging a “a minstrel show him in front of all these white people” at the White House.

NewsBusters also reported: Lemon explained that he “couldn’t even watch it” because it was “so hard” watching President Trump “exploiting someone who needs help, who needs to back away from the cameras, who needs to get off stage, who needs to deal with his issues and if anyone around him cares about him...they need to grab him, snatch him up and get Kanye together because Kanye needs help.”

Walker was a Heisman Trophy-winning running back at the University of Georgia and played for the U.S.F.L.'s New Jersey Generals, a defunct team then owned by Trump, before playing in the NFL. Walker largely stays out of politics, but after CNN stooped so low Tuesday night he tweeted:

Walker, who is African-American, does not fit the media narrative that Trump is a racist who hates blacks. Thus the chirping crickets across the board of left-stream media. The Washington Times, Fox News and Townhall.com, are among the very few reporting on the celebrity athlete's calling for the sacking of the CNN Tonight crew.

By early Friday afternoon, the liberal-slanted Atlanta Journal Constitution weighed in with a story on one of the greatest athletes in Georgia history. Becca Godwin wrote that Walker appeared on Trump’s reality TV show Celebrity Apprentice and was tapped by Trump to serve on the president's sports council. Godwin also posted Setmayer's Twitter response to Walker: 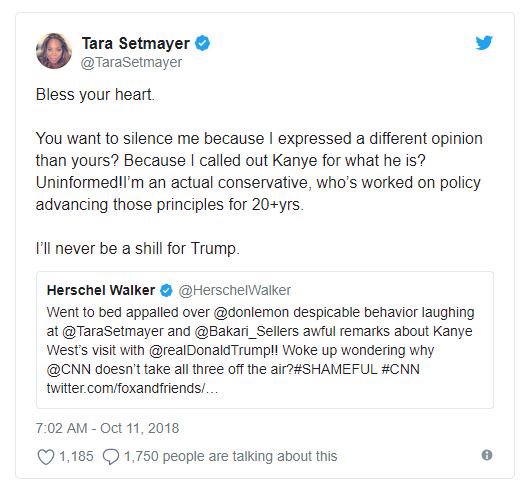 Setmayer previously served as a political trainer for GOPAC, a conservative organization specializing in educating, organizing and training grassroots Republicans intending to run for public office, and worked as communication director for Republican Congressman Dana Rohrbacher. She has been a vocal critic of Trump.

Godwin wrote that Walker appeared on Trump’s reality TV show, the “Celebrity Apprentice." And "Earlier this year, Trump tapped Walker for a two-year post on a presidential sports council."

On Fox Sports 1's Speak for Yourself program, Jason Whitlock and Marcellus Wiley said we've got to move beyond ridiculing people we disagree with.