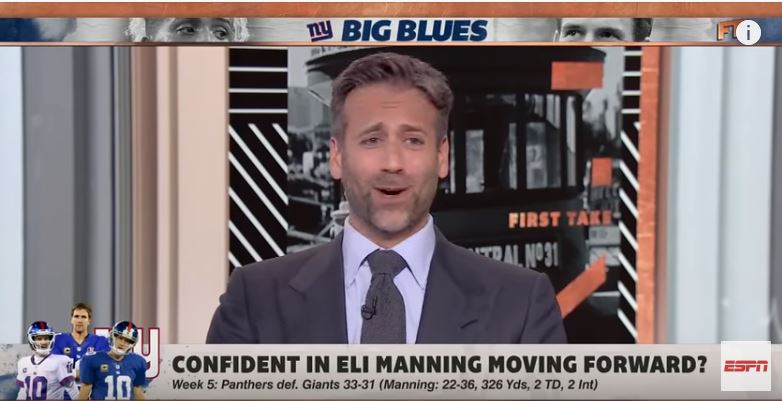 Modiano is no stranger to partisan politics on and off the sports page. He attended the “Calling All Men” rally in Washington, D.C., "to stop the confirmation of Brett Kavanaugh to the Supreme Court." He's the author of the column, "The audacity of white men who condemn Serena Williams" and "Great White Hope QB Awards: Tyrod Taylor and how white privilege works in the NFL."

In campaigning for the end of Eli Manning's monopoly on the 1-4 Giants' quarterback job, Modiano wrote:

"After getting benched for Geno Smith last year, Eli’s watery locker room eyes seemed to produce more sympathy and visceral outrage than for Christine Blasey Ford. The Giants coach was fired. Eli got his job back, and Brett Kavanaugh became a Supreme Court Justice."

Modiano listed five reasons on why Kaepernick would work wonders in the Big Apple. On the first and second points, he deferred to Kellerman:

1. Eli is a Bad fit for this Team, and Especially his Lack of Mobility

“The quarterback play is killing this team!” says Kellerman. “Now does Kaepernick walk off the street and become the starter? Of course not. If they can come back because the division is weak, good for them and then they can develop Kaepernick as an answer.”

2. Kaepernick is an Option to Eli

"Kaepernick might be ready to play if he gets involved in a system right now, by the middle or late of this year," Kellerman said. "If they do start to make a run, but Eli's play starts to falter, you have an option there.” Modiano writes, "If the Giants keep losing, you have the best back-up quarterback in the NFL who can step right in."

3. Kaepernick has never had a wide receiver close to Odell Beckham. You must be at least curious?

After needing two games to recover from injury (in the 2016 season), Kaepernick steadily improved as the season progressed. But the most amazing thing is that Kaepernick did it with Jeremy Kerley as his No. 1 receiver.'' Jeremy who?

On the fourth point ("Kaepernick and Saquon Barkley would be a dynamic Run Pass Option (RPO) combo"), Kellerman argued that "[y]ou can't run RPOs with Eli Manning” and marveled at the possibilities with those plays considering Saquon Barkley is the team's running back. Modiano even boasted a la Chris Matthews-style that "it gives me chills."

And for the fifth point entitled "[t]he Giants will likely increase revenue by signing Kaepernick," Modiano recalled that Giants' owner John Mara had previously seen "unprecedented" anger from fans opposed to signing Kaepernick. But that would all magically go away if New York signed Kaepernick now.

"Do you really think Giants fans are going to burn their tickets (again) if they sign Kaepernick?" he asked. "Perhaps some will. Who knows, let’s say a few do?....Any lost tickets? They will be replaced in five minutes."

In his closing, Modiano wrote that Kaepernick would not be a distraction and cautioned the Giants not to sign Kaepernick for the wrong reasons, but because he'll make your team "a whole lot better." Says another of the Kaepernick apologists wearing rose-colored glasses.