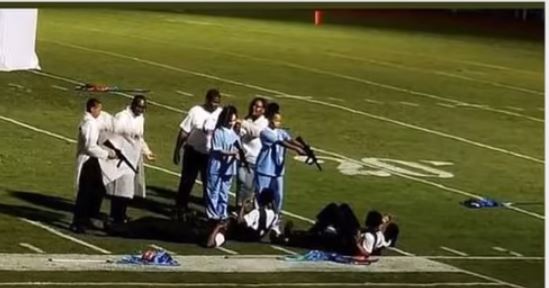 What happened at halftime of a high school football game at Brookhaven High School, in Jackson, Miss., this weekend may have been one of the darkest hours in Friday Night Lights history. Students from the visiting Forest Hill High School marching band staged a halftime skit in which students dressed up as doctors and nurses held other students dressed as SWAT team members at gunpoint. The Tribunist reports, "The move would be controversial at any game, but is even more shocking as two Brookhaven police officers were killed in the line of duty last week."

Social justice warriors across the nation are accusing police officers of brutality and institutional racism, and this ugly incident in which vigilantes threaten public safety officers with threats of violence conveys an ugly message.

The images of SWAT team members on the ground with toy versions of high-powered weapons pointed at them have gone viral. The governor, Phil Bryant, and Brookhaven Mayor Jerry Cox have gone ballistic. The mayor apologized and Forest Hill High suspended the band director. 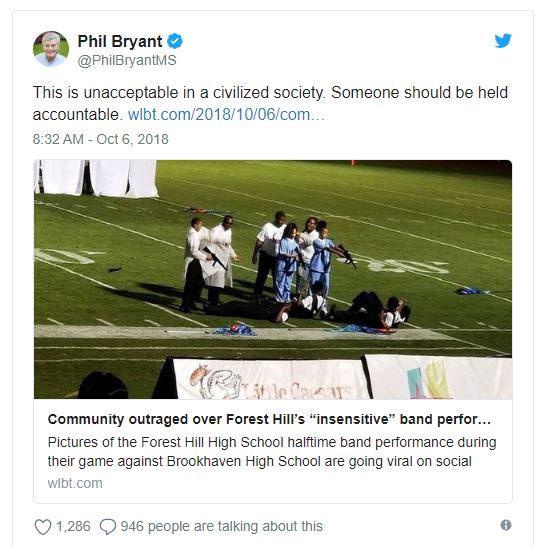 In its un-bylined story and in a classic understatement, The Tribunist writes, "Someone thought this seemed like a good idea. In retrospect, the decision must seem dubious. Either way, the images of a high school band’s halftime skit are going viral."

“The Brookhaven School District fully supports our local law enforcement. The halftime show performed by the visiting band during last night’s game was an unfortunate issue that our district had no prior knowledge of and does not condone. Our main focus remains, as always, on the safety of our students and the student-athletes performing on our fields. We appreciate our community’s support as we continue working to ensure a positive environment of sportsmanship for our student-athletes and those visiting Brookhaven.”

Brookhaven's Mayor Cox wrote a long response on Twitter. Here is a portion of his message:

"The halftime performance conducted by the Forest Hill Band at our Brookhaven High School home football game last night was inappropriate, irresponsible, and insensitive to say the least. It was a horrific display of disrespect demonstrated toward our local law enforcement, our students and families in attendance of the game, and all citizens of Brookhaven. ... This type of performance is inexcusable under any and all circumstances, especially within the school system, but also in light of our fallen heroes on September 29th who served the Brookhaven Police Department with great honor, Officer Zach Moak and Officer James White."

The Tribunist also posted several tweets and quotes from people who are rightly outraged by a Forest Hill band's despicable performance, including these:

“Charges should be pressed on them for bringing guns to a school event! There have been children expelled for bringing fake guns on school property! Such poor taste!”

“How was this allowed to even happen? Sick and crazy people. They should all be expelled & who ever is over them Principles & Teachers should be fired. This is uncalled for. I demand a public apology from this band director and band members. Not written one, but come back to BHS, stand in the middle of the football field and apologize to the entire community.”

“I can’t even imagine what the citizens of Brookhaven must have felt. My prayers are with you all. I’m so sorry that this disgraceful band performed so inconsiderable.”

Jackson Public Schools Superintendent Errick L. Greene offered "my deep and sincere apologies for the performance," and said the band's skit was "based loosely on the movie, 'John Q' ... (and) depicted a hostage scene that included toy guns." That movie features Denzel Washington holding people hostage so his ailing son can get a heart transplant the father could not afford.

The Jackson Free Press reports Forest Hill has a history of offensive displays going back to when it was a mostly white school during Jim Crow segregation.