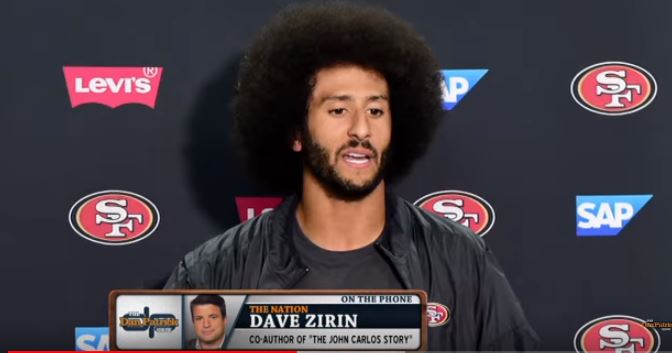 In our latest visit to left-wing firebrand Dave Zirin, red meat sports editor of The Nation, we learn that Nike is unfit to brand the exalted prince of social justice activism, Colin Kaepernick. The conservatives he considers unfit, period, got a passing mention in this screed, as Zirin cut Nike down to size. It's all about Kaepernick and not about the Nike swoosh logo.

Zirin writes that news of Kaepernick becoming the face of Nike's 30th anniversary campaign "sent social media into paroxysms of confusion". He counts himself as one of those on the far Left who "stopped short of singing Nike’s praises but saw it as a victory for Kaepernick: He stood by his principles and now has a sweet shoe deal to show for it, which for many, further legitimizes his decision to protest."

On the right, Zirin says, "there were calls for demonstrations against the sneaker company. #BoycottNike trended on Twitter. Scenes of people burning their sneakers or cutting the swooshes off of their clothes also went viral."

Zirin's core argument, though, is that Nike simply has not earned a place on the moral high ground worthy of Kaepernick's lofty stature:

"(G)lobal, multibillion-dollar corporations that run an archipelago of sweatshops don’t underwrite rebellions. They co-opt and quash them. If anyone can navigate this snakepit, it is Colin Kaepernick, but it won’t be easy. The revolution will not be branded."

Furthermore, Nike was accused earlier this year of "fostering a sexist work environment with chronic harassment." The New York Times described life inside Nike as "toxic." Equally bad, Zirin wails, is that Nike co-founder Phil Knight committed the unforgiveable sin of donating $500,000 last year to a Republican running for governor in the Left-coast state of Oregon.

For three decades Nike has used the image of rebellion to sell its gear, while stripping that rebellion of all its content, Zirin says of the swoosh-makers. Nike’s vice president of brand for North America, Gino Fisanotti, told ESPN, “We believe Colin is one of the most inspirational athletes of this generation, who has leveraged the power of sport to help move the world forward.” This remark set Zirin's head spinning:

"The idea that Nike executives would position themselves as messengers of Kaepernick’s righteous years-long struggle is, to put it mildly, galling.

"In Nike’s antiseptic, hollow corporate-speak, Kaepernick is simply 'moving the world forward.' There is no mention here of police violence or racism. And it would be stupid to expect it. This is Nike. Asking them to be a voice for social justice is like asking a dog to meow."

Kaepernick deserves so much better, writes Zirin. He's dealt with hatred and death threats and been made a villain by President Donald Trump. While reaping this notoriety, Kaepernick has given more than a million dollars to his favorite charities (including an abortion organization).

Despite personally destroying the pro football experience for millions of Americans, despite hating on the country that made him a mega-millionaire as a San Francisco quarterback/hater of police, veterans, stars, stripes and the anthem, at least Nike is paying him for his incalculable divisiveness. Zirin laments that Nike is still good for two things:

First, the filthy rich Kaepernick "has been unable to earn a living during the prime years of his career. It is a great thing that he is actually going to earn an income and receive funding for his activist work," Zirin says.

Second, the first Kaepernick campaign ad aired during Thursday's Eagles-Falcons game, giving a thumb in the eye to every NFL owner who has colluded against him. Zirin says, "Imagine the first time this ad plays during the commercial of an NFL game. Jerry Jones’s head might explode clean off his body. So good for Colin Kaepernick."

Zirin closes his latest rant by writing "the message of standing up to police violence and racial inequity shouldn’t end up in a swoosh-laded graveyard. That’s the risk that comes with this sponsorship. But if anyone has earned the right to take that risk," it’s his man, the legend Colin Kaepernick."