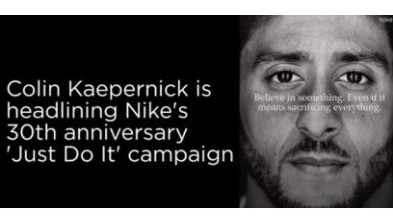 Unbelievably, Nike just made Colin Kaepernick -- of all people! -- the face of its 30th anniversary "Just Do it" campaign. Was it the cops-are-pigs socks that sold Nike on the toxic former NFL quarterback? The pro-Castro t-shirt? The America is not free tweet from Ghana? So many "great marketing" choices for Nike! Bleacher Report's Tim Daniels did not speculate on the reasoning behind Nike's bizarre decision.

However, People magazine's Karen Mizoguchi reports the new Nike ad campaign marks Kaepernick’s first gig as a corporate spokesperson and comes despite Nike being the NFL’s official uniform sponsor. Kaepernick is suing the NFL and claiming its owners are colluding to keep him out of the league. Will Nike and the NFL dare risk thunderous booing by sponsoring Kaepernick ads on stadium message boards this season?

At least for today, Nike's social media messaging was safe from verbal berating: “Believe in something, even if it means sacrificing everything.” The company that gave us the swoosh symbol might also adorn its product packaging with this classic message made two years ago by Kaepernick when he started anthem-kneeling mania:

"I am not going to stand up to show pride in a flag for a country that oppresses black people and people of color. To me, this is bigger than football and it would be selfish on my part to look the other way. There are bodies in the street and people getting paid leave and getting away with murder."

Hey, Phil Knight, co-founder of Nike, there's a message that really sells! Fabulous marketing! Your products may sell well in Iran because, as The Guardian notes, its former president of Iran, Mahmoud Ahmadinejad, is all in on Kap. He tweeted his support: 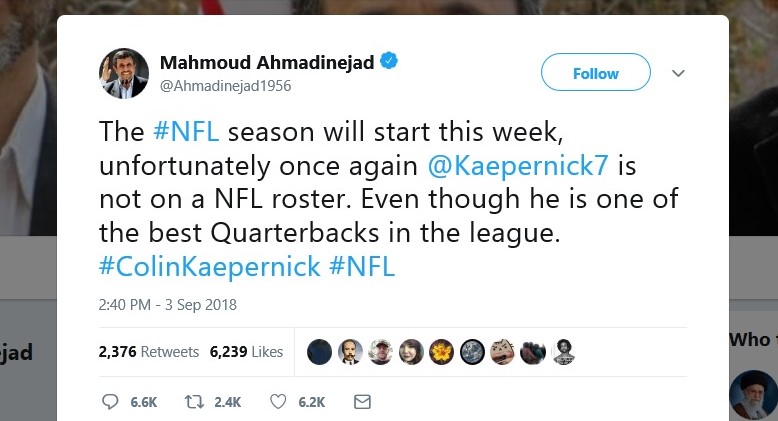 Nike must not have received Kaepernick's message that America oppresses people of color. Or by waving big bucks his way, Kaepernick may have changed his mind about that. Born of an African-American mother and raised by a white family, Kaepernick has been oppressed by multi-million dollar contracts while compiling a losing record as a starting NFL quarterback. Now he'll be further oppressed by millions more from the Nike contract. How generous of Nike to rescue Kaepernick from the unemployment lines too.

Kaepernick's got to be thinking Nike just made America great again! Today' he posted this refreshing tweet:

"Believe in something, even if it means sacrificing everything. #JustDoIt"

Although Nike is headquartered in the progressive cocoon of metropolitan Portland, its marketing strategy is certainly mystifying. Just last week an NBC-Wall Street Journal poll found that 54 percent of respondents do not support the disrespectful national anthem protests started by Kaepernick. It's a strategy disdaining the maximum bang for the buck and aiming for a smaller portion of the U.S. population's shopping dollars.

Michael Errigo and Rick Maese of The Washington Post reported, “It’s a top-level football deal, a deal that reflects him as an icon and an athlete, not just an athlete,” a person familiar with the agreement said."

Kaepernick played out his option with the San Francisco 49ers after the 2016 season, when he ignited the disgraceful pre-game anthem protests in the National Football League. The NFL's approval rating has dived precipitously since then and, sparing themselves from fan animosity and loss of ticket sales, none of the league's teams has elected to bring the Kaepernick circus to their town. Not one team is willing to let him "just do it" on their field.

Nonetheless Nike is hoping the Kaepernick campaign will score a huge touchdown.