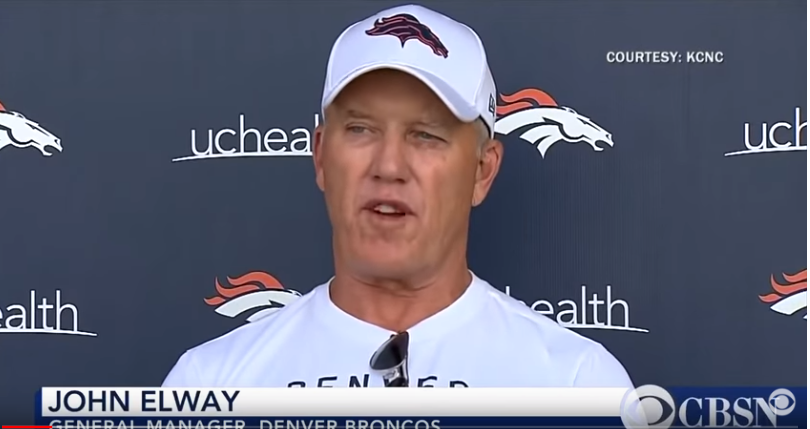 Sports Illustrated legal writer Michael McCann, an associate dean of law at the University of New Hampshire School of Law, seems to want Colin Kaepernick to win his collusion lawsuit against the NFL just a "little" too badly. And at the expense of Denver Broncos' general manager John Elway. McCann offers eight ways that could happen, but isn't very convincing or objective in his arguments.

Kaepernick's attorneys deposed Elway in mid-May, and McCann is now zeroing in on him because a reporter asked him on Thursday if the Broncos' shaky quarterbacking situation has given him reason to sign Kaepernick. Elway answered, saying:

Kaepernick responded, by Twitter, that he had a better career quarterback rating than Elway (who won two Super Bowls), and McConnell used the occasion to launch into his eight "keys to victory for Colin campaign."
McConnell's Really Reaching!
1. He writes that "Elway’s comments do not undermine Kaepernick’s grievance. Just the opposite, actually, they could prove problematic for both him and the NFL."
2. "For two important reasons, the Broncos offering Kaepernick a contract in 2016 in no way negates the possibility that Kaepernick later experienced collusion," McConnell continues.
3. "(T)he alleged collusion took place, or could have been discovered, at point(s) between mid-July and mid-October 2017—in other words, long after Kaepernick declined to take a massive pay cut to join the Broncos." If McConnell was arguing his case in a court of law, the judge would surely be getting impatient by now.
Kaepernick's Entitled!
4. "(E)ven if Kaepernick had rejected an opportunity to join the Broncos within 90 days of his collusion filing, that decision wouldn’t have disproved collusion. A finding of collusion doesn’t require a league-wide conspiracy. It only takes two or more teams, or the league and at least one team, conspiring to deny Kaepernick of the collectively-bargained right to sign with a team."
Elway Interested Once, Now Required to Sign Kap
5. McConnell further writes: "(Arbitrator Stephen) Burbank almost certainly wants to know the answer to the following question: If Elway wanted to sign Kaepernick in April 2016—before the kneeling began—why would he not want to sign Kaepernick in 2017 or 2018?"
Kaepernick Played Well in Back-up Role; Show Him the Money!
6. If the Broncos were willing to pay Kaepernick $7 million in 2016, he threw 16 TD passes in limited play that season and "was he not worth engaging at all when he became available in March 2017 and remained available thereafter?"
If Osweiler, Then Certainly Kap!
7. McConnell then contends that general managers "will do everything within the rules to win. There have been plenty of general managers who sign players after those players previously said 'no' or had left the team. To that point, Elway didn’t hold a grudge in signing Brock Osweiler in 2017, two years after Osweiler departed the Broncos to sign with the Houston Texans." So there was no justification in holding a grudge against Kap.
The What-if-Denver-Colluded-with-Another-Team Theory
8. Desperate to prove Elway complicit in collusion, McConnell pleads: "As yet another possible answer, if Elway and the Broncos didn’t sign Kaepernick in 2017 because of the controversy over kneeling, Elway would need to explain how he reached that conclusion. ... (W)hy would a team worry about the impact of signing a player who is connected to the anthem controversy? The answer could lead to testimony that the team’s worry was shared by other teams. To that end, if there were consultations between the Broncos and other teams about not signing Kaepernick, then Kaepernick’s theory would be greatly advanced." Like their arch-rival Kansas City Chiefs were concerned about Denver possibly signing Kaeperick!
It all adds up to a lot of theories and what-ifs by McConnell, which is amazing for a law school professor.