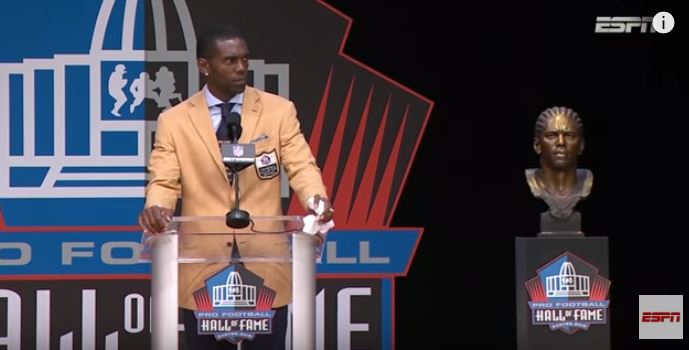 The NFL's annual Hall of Fame Induction ceremony on Saturday became just another high-profile forum for political statements, like the Oscars, the Grammys, the ESPYs and other programs used by leftists to promote their controversial views. Thanks to newly enshrined Hall of Famer Randy Moss (see photograph), the former wide receiver who wore a tie bearing the names of a dozen black men and women killed in altercations with police or citizens. Call it the opening shot of protest for the 2018 NFL season.

To put things into context, Moss's entrance into social justice and his tie are currently front and center on Colin Kaepernick's Twitter page.

Legendary Baltimore linebacker and new Hal of Famer Ray Lewis took a more positive approach as he invoked the late Dr. Martin Luther King and extolled the audience to look at what unites us, as opposed to the divisive protests marring NFL games (and Hall of Fame ceremonies):

"Are you living every day to make this world better? Think what we can do if we work together as a country ... teaching our nation to love each other again.

"It's how we react to the challenges in our life that shows our greatness. How do we execute that dream? Who will answer that knock on the door in the middle of the night? And it has to start right now. We need people willing to fight for what is good and what is right.

"We can go from being legends to building a legacy bigger than football, bigger than sports. Look at what unites us ... the answer is simple, love. Hope, faith and love, and the greatest is love."

"Probably Moss didn’t mean it this way, but with the context of Ray Lewis’s sopping wet jacket and crazy-ass protect our children from school shootings by bringing prayer back to schools sermon, the quiet acknowledgement and memorialization of actual victims of police violence seems especially poignant."

"Few people can probably say whether Ray Lewis continues his wild-eyed performance of Being A Good Man in private. And, fuck it, if he does—if he’s so caught up in this desperate, sweaty, rapturous self-exaltation that it compels him to perform patience and generosity towards strangers and family alike, for the sake of his own glory—certainly that is better than being a bitter, guarded, self-loathing asshole."

Media also seem to have amnesia about the pattern of disrespectful behavior that made Moss a controversial figure throughout his football career. In 2002, he bumped a female traffic control agent for half a block, until she fell down, with his SUV. Moss, who had marijuana in his vehicle, was arrested on suspicion of a felony assault charge. Since he's now officially a social justice warrior, none of that needs attention from the media though.

CNN's Kelly McCleary raved about Moss's "powerful statement" and wrote, "He joins a growing list of pro athletes, including NBA star LeBron James, Cleveland Browns receiver Andrew Hawkins, members of the St. Louis Rams and others, who have paid tribute to African Americans killed by police."

No doubt about it, Moss has also just made his entrance into the social justice warrior "hall of fame."