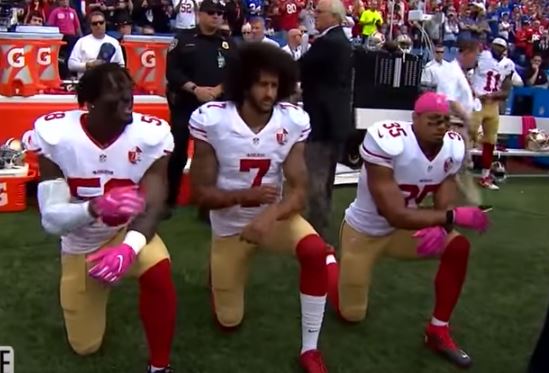 As NFL teams are gathering for preseason camp, Associated Press sports writer Paul Newberry suggests the league's social justice warriors play a huge Trump card if free agents Colin Kaepernick (center in photograph) and Eric Reid (right in photograph) aren't signed soon. Both former San Francisco 49ers disrespected veterans and the national anthem by kneeling during the final year of their contracts, incurring the wrath of fans and the good sense of owners not to hire them. Newberry is encouraging the players to go on strike until the two pariahs are signed.

Players who are lucky enough to have a job should continue their calls for social justice by pondering what they can do to help get Kaepernick and Reid back on the field, Newberry writes:

"Maybe a one-day sickout during training camp. Or kneeling en masse before the first game. Perhaps, as a last resort, they should consider an actual strike."

Sports media almost universally support Kaepernick, Reid and the NFL anthem protests. Newberry says they are good enough to be playing for someone, but the league is making an example of them. It's "a clear warning to its employees that only so much social activism will be tolerated even while it feigns a sense of respecting their desire to protest during the national anthem. If the NFL were really concerned about its players, it wouldn't be denying these two their well-earned right to make a living. Rest assured, history won't be kind when it looks back on the way Kaepernick and Reid were treated by the NFL."

Kaepernick and Reid are following the same path as the social warriors of yesteryear. Newberry compared them to Muhammad Ali, who was stripped of his heavyweight boxing title for refusing to serve in the military during the Vietnam War. And to Tommie Smith and John Carlos, "who defiantly stood with their fists in the air on the medal podium at the 1968 Mexico City Olympics to protest the way black people were — and still are — being treated in America." Also, Newberry writes:

"Ali, Smith and Carlos were vilified at the time.

"Now, they're viewed as heroes but only after making huge personal, professional and financial sacrifices to stand up for what they believed.

"Kaepernick and Reid are making those same sacrifices."

Multitudes will disagree with Newberry, especially about Smith and Carlos, who are still reviled by many Americans for their shameful protests.

Newberry is so desperate for Kaepernick to play again that he revisited the last game he played in the NFL, "one of his better performances," 572 days ago:

"On New Year's Day 2017, playing behind a leaky offensive line that left him running for his life (he was sacked five times), Kaepernick completed 17 of 22 passes for 215 yards and a touchdown in San Francisco's 25-23 loss to Seattle. His 122.3 rating was the seventh highest of his 69 career games."

Despite that "performance for the ages," Newberry says the NFL would have you believe he's not good enough to play, even though many active quarterbacks lack Kaepernick's incredible rèsumè. He and Reid, who "bravely joined Kaepernick in his stoic, symbolic gesture, and carried on the kneeling when his former teammate was sidelined for the entire 201(7) season," were of course "blacklisted."

Newberry's drastic solution to the NFL's resistance to anthem protests is to kill the golden goose, which has already lost its luster. A strike will only hasten the exodus of additional hordes of fans who won't be looking back on their way out.