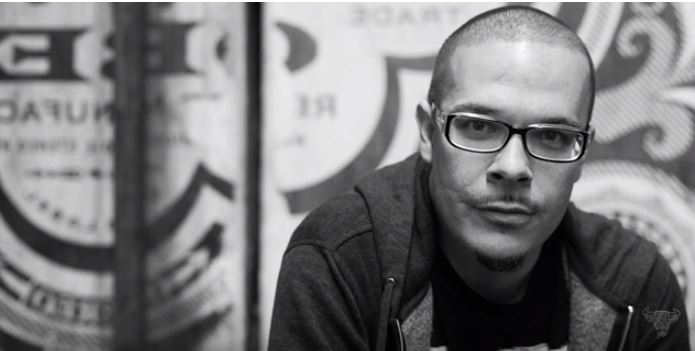 Saturday marked the 500th day of Colin Kaepernick's absence from the NFL. His close personal friend Shaun King (appearing in photo) called the refusal of teams to sign him the biggest injustice to an athlete in his lifetime. King, all of 38 years young, formerly wrote about social justice for the New York Daily News, but is now focusing on civil and human rights, racial justice, mass incarceration and law enforcement misconduct on The Intercept blog. In short, he's a shill for Kaepernick.

"While he became a legend and a cult hero for millions of people, taking a knee during the national anthem appears to have completely cost him his career," writes King, who says he'll likely boycott the NFL for the remainder of his life. "He has not so much as received a single tryout from even one team, in spite of being considered by experts to be around the 15th best quarterback in the NFL."

King would surely get a lot of debate from NFL coaches and analysts on such a lofty claim about Kaepernick's skills. His claim is purely subjective, clouded by his friendship with Kaepernick. None of the teams owned by liberals have signed him. The man had a 1-10 record the last time he played, in 2016. King must believe Kaepernick can use that sorry record as a springboard to leading a team to the Super Bowl. Incredulous!

Droning on, King says "the decision has next to nothing to do with football — and everything to do with Kaepernick’s protest." King lacks the clear-eyed objectivity to see the total package: Kaepernick's so-so talent, along with his radical, anti-American activism and his immense contribution to the NFL's loss of public support make him an extremely poor hire.

Pro football teams "seemed content to lose without him, even if he would have given them a better shot of making the playoffs," King claims. King doesn't know for that sure; no one does. He also brought in the Muhammad Ali comparison:

"What has happened to Colin Kaepernick is the single biggest injustice done to an athlete in my lifetime. It is on par with Muhammad Ali being stripped of his championship belt."

NFL owners think the opposite. Kaepernick may have done more damage to their enterprise than any other single person in the history of the league.

Ali's ex-wife, Khalilah Camacho Ali, who was married to the boxer from 1967 to 1976, disagrees. She told TMZ Sports that Kaepernick is "not heroic" for his protest, he should apologize for his actions, and that he needs to "get off his high horse."

Liberal ESPN talk show host Stephen A. Smith disagrees that Kaepernick should be compared with civil rights leaders in sports like Jackie Robinson.

Yet King presses on in defense of the 49ers' former quarterback. "In the prime of his life, at the age of his peak physical prowess, and what should be the prime of his career, Kaepernick is being denied the right to make a living in the sport he knows and loves. He was beloved by his teammates. He is an upstanding man on and off the field. His work ethic was never questioned. He is injury free. And he’s ready to play."

Nobody has a "right" to play in the NFL. It's a privilege that is earned.

King takes a final swipe at others he blames for denying Kaepernick his right to play pro ball and then says he's taking his ball and going home, never to watch the NFL again:

"And it’s no accident that it’s happening under the Trump administration. In fact, it seems to be happening as a direct result of teams being terrified of what President Donald Trump and their ultra conservative fans might say if they signed Kaepernick."

It's not what "ultra conservative fans" or any other fans say. It's the tickets they won't buy and the televised games they won't watch if a radical like Kaepernick returns to the NFL.