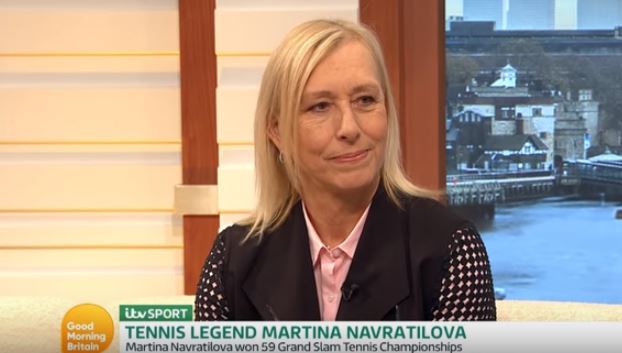 Wimbledon tennis play is upon us, and along with it, a perfect time for Sports Illustrated to talk politics and slam the Trump Administration in an interview with lesbian firebrand Martina Navratilova (see file photo)! The nine-time Wimbledon champion gave the LGBT movement free publicity and bashed America's top two elected officials for taking human rights backwards.

As part of his "Tennis, where are they now" feature, executive editor and senior writer L. Jon Wertheim asked Navratilova about ... this year's Wimbledon favorites? Nope. How bout politics and "What's unfair in 2018?" The woman who, last year called for Australian Open officials to rename Margaret Court Arena because Court is a "homophobe" who opposes same-sex marriage, is now blaming Trump and Pence for making America hateful again:

"Well, the erosion of human rights around the world. There had been so much progress made but in America we are going backward. I just saw a sign that somebody posted on Twitter and it was from a hardware store. No gays allowed. On a hardware store.

"And that is all coming from the top, you know. That is all coming from Trump and his enablers. And it is really terrifying what we are doing with immigrants. Turning people into criminals who are just asking for a better life. They haven’t done anything wrong . . . and they still get separated from their children. It is just this erosion of humanity that is happening in my country."

If anything eroded, it was Barack Obama's refusal to enforce immigration law and his turning our military into a forum for social engineering.

And since basketball's Golden State Warriors recently made news for winning the NBA title and for not visiting Trump's White House, why not ask a 61-year-old retired tennis star about sports teams' presidential visits. Martina took a forehand smash to that question:

L. Jon followed up with the question, "But don’t you think that is a triumph—athletes figuring out what you figured out in 1982?" Navratilova said that "social media makes it much more possible. I know I would have been much more vocal because I would have had the opportunity. I had the platform, but you still do an interview and you hope somebody writes something. Now you are your own writer. You have your own newspaper basically. So it is much easier to get involved and it is nice to see these athletes speaking out, even though it may hurt them in the pocketbook. But they are on the right side of history, so I think that is where people can say, You know what? No matter what happens now, I am doing the right thing. But yeah, it is gratifying to see more athletes speaking out and being personally involved."

The tennis world's queen lesbian bee is pleased that people "have caught up on the gay rights issue, but we are still sliding backward. I thought we were done fighting a lot of these battles. So, it’s more important to stay vocal and stay involved, to get involved."

Navratilova said her mom used to ask her why she had to keep the rainbow flag, and her reply that no one was following behind her. But "Now there are people behind me. (along with beholden media) "It’s great that I am not the only one holding that flag, or fighting the good fight. But it just saddens me that it is still necessary."

Wertheim wanted to know if she has written off politics. Thankfully she said yes.