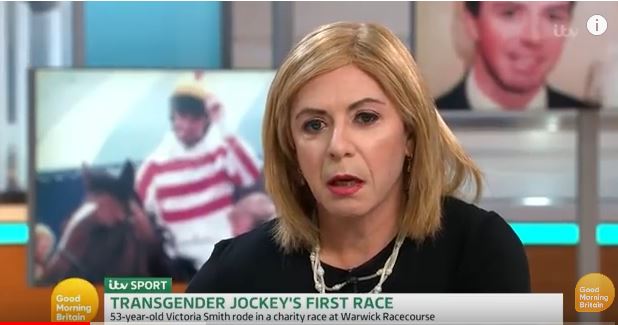 Editor's note: As first published, this article erroneously attributed a quote from a 2015 CNN article to T.K. Skenderian, Director of Communications for the Boston Athletic Association. The quote actually is by Boston Marathon runner Amelia Gapin. We apologize for the mistake and any confusion caused.

CNN's feature on a jockey engaged in so-called "transitioning from male to female" is part of a larger and ongoing agenda by the network to push the LGBT transgender agenda. Matt Majendie wrote the story on Victoria (previously Vince) Smith, who was inspired by Caitlyn Jenner to become a woman.

If you think Smith is confused about his birth gender, so is Majendie, who wrote this gender-bending paragraph:

"As Vince Smith, she boasted 250 races as a jockey before hanging up the whip but has made a return to the saddle as she transitions to becoming a woman making her the first jockey to ride as both a male and female."

Now "Victoria" Smith, "she" returned to racing as a 52-year-old to almost pure adulation. "The reaction of the racing community has been fabulous," said Smith, who finished second on the gelding Roy Rocket, still a male horse despite castration. "I couldn't have hoped for a better reaction. I've still got a long way to go, there will be rocky times and it can't all be rosy."

It will, however, be rosy from CNN's perspective. Majendie continued the bizarre story: "Smith always knew she was different from the age of four or five" as a boy, but she "couldn't quite put my finger on it." The idea he might really be a girl "gnawed away at him, but he was attracted to and dated females. Majendie rationalizes this confusion by writing, "But increasingly, Smith would be attracted by women as much by their looks as enviously eying their clothes, jewelry and make-up." These are the days of our lives as the gender turns.

Horse racing is a macho world, but the jockey was "Partially inspired by Caitlyn Jenner and Kellie Maloney, who both transitioned from the 'male-dominated sports worlds' of the decathlon and boxing respectively, helped instill a bit more confidence in Smith. ... I thought to myself 'if I don't do this, I'll die unhappy.' There's still a long way to go but I'm as happy as hell."

This is just one of numerous examples of CNN promoting the big T in LGBT, many concerning President Trump's ban on transgenders in the military.

The list includes Chris Mosier, born female and now a "male" duathlete labeled a "trans-athlete trailblazer" in a 2016 CNN story by Majendie. "I never really identified as a woman but there was an issue that society had presented me one way. I felt like, 'I'm not a man but I don't feel like a woman,' so that was a struggle," said Mosier, voted athlete of the year at the Complete Sports Diversity Awards and recognized in 2011 at the Obama White House for "his efforts in the LGBT community."

In a 2015 story, CNN's Sheena McKenzie detailed the confused life of Frank Maloney, the former manager for world heavyweight boxing champion Lennox Lewis. Only Frank is "now Kelli," "dressed in a fluffy maroon jumper with painted nails to match."

CNN's Emanuella Grinberg wrote a story in 2015 about transgenders running the Boston Marathon.

"We keep living this hell of false firsts over and over because cisgender people continue to get off on a voyeurism of trans lives," [runner Amelia ] Gapin wrote on her blog. "They treat it like a spectator sport. Something that happens all the time isn't very interesting, but a first makes for a story."\

She (Gapin) acknowledged that visibility is good for the community. But each positive reaction comes with an ugly, negative comment that seeks to deny their existence, she said.

"Where we fail are covering the stories of the people who think differently, people who don't want to have transgender surgery paid for in their state, who don't want transgender bathrooms, who want to see abortion banned. I think CNN to some degree, does a poor job reaching out to find those voices and giving them a fair crack at the whip. ... What usually happens is they ask them really pointed questions, really demeaning, interrogative type of exchanges. And I don't think they always get a fair shake. There's an automatic bias against them."

Make that to a large degree! Because when it comes to gender bias, CNN is the Confused News Network.