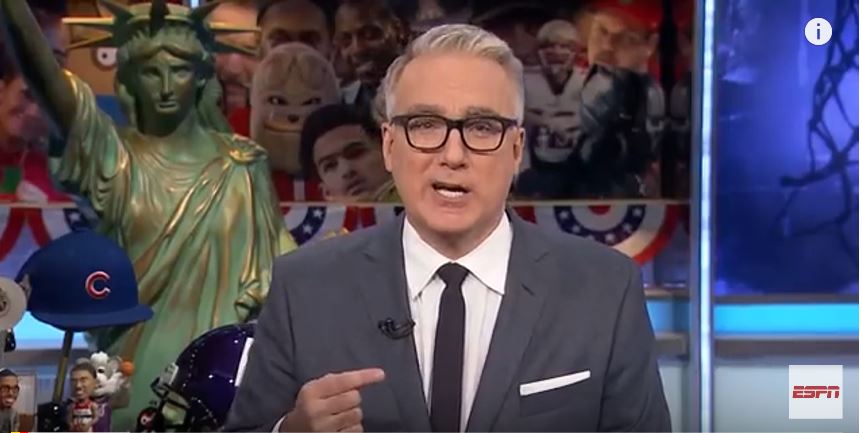 The furor over Roseanne Barr's racist comments and the demise of her television program have rippled across Disney and all the way to ESPN's Bristol, Ct., headquarters. And why wouldn't it? ESPN's Jemele Hill and the recently rehired Keith Olbermann (see photo) could erupt in outrageous outbursts at any time and cause the Disney-owned company additional public relations nightmares.

ESPN managers are telling their most volatile personalities to be careful on social media. According to an unnamed source cited by Andrew Marchant of the New York Post, ESPN put Olbermann, Hill and Kenny Mayne at the top of its watch list. Marchant's source claimed the three mentioned above "are the ones most frequently associated with venturing outside of sports." That's putting it mildly, as all three have angered the public and embarrassed ESPN in the past.

Hill ignited one of ESPN's fiercest firestorms in a fall 2017 tweet when she called President Trump "a white supremacist." The fallout spread to the White House, where presidential spokesman Sarah Huckabee Sanders denounced Hill and called for her firing. No wonder the Trump Administration objected so strongly, considering her vile social media diatribe:

"Trump used Kaepernick and the NFL player protests like a racial chew toy, stoking his base with consistent and frequent attacks on the NFL and Kaepernick."

Olbermann has worked several stormy stints at ESPN and spent volatile stop-overs at MSNBC and GQ magazine as well. With a long history of attacking conservatives, this fiery insult machine makes the movie legend Howard "I'm mad as hell and I'm not going to take this anymore!" Beale look like a choir boy by comparison. It would take a volume of books to record all of his outrageousness, but here are a couple samples:

In 2017, after Secretary of Education Betsy DeVos tweeted a prayer for Texas hurricane victims, Olbermann responded with an x-rated tweet of his own: "The hurricane is going to do less damage to schools than you are, m----------r."

If you had just hired Keith Olbermann, in this incendiary political climate, and given him a microphone to speak to millions of people, you'd be concerned, too. But then, why re-hire this walking, ticking time bomb in the first place? You know the wrath and venom he brings to the table. Marchant says Olbermann has quieted down about politics, but given his past the claim seems like a real stretch.

Mayne tries to couch his political bias in poor, one-sided attempts at humor. In baseball play-by-play, his home-run call leading up to the 2008 election was "Obama!" On another occasion, he tweeted: "Almost rammed car with Palin bumper sticker with intent. Held up...coulda been kids in the car."

Of the three, only Hill and Olbermann have been suspended for their indiscretions.

Marchant's story goes on to say that Thursday ESPN’s upper management mainly focused on getting the message to its most outspoken personalities. Managers also contacted broadcasters and writers who have not previously been involved in social media controversies related to politics or race.

Good luck with that! Instead of playing referee with its sometimes out-of-control employees, ESPN could have made its job a lot easier, and its products less controversial, by hiring fair and balanced journalists who will stick to sports instead of partisan politics.