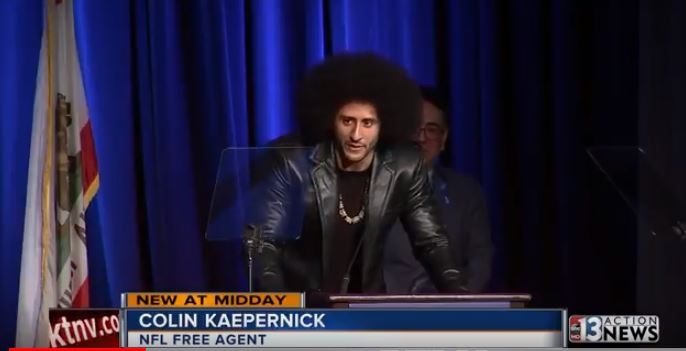 History will likely regard Colin Kaepernick favorably. If the historians are left-leaning media like Ben Strauss and others who support radical athlete protests. In a Politico post titled "The Arc of History Bends a Knee Toward Colin Kaepernick" Strauss forecasts the ostracized former quarterback emerging "as an icon of social justice."

That's how Kaepernick is already regarded by those on the Left who care not a wit about his disrespect for the flag, anthem and veterans, his contempt for "slave patrol" police officers and his love for Castro. It's a matter of the Left idolizing the Left, especially through their awards, Strauss points out:

"First, it’s important to remember that the former quarterback has already been named GQ’s Citizen of the Year and received the Muhammad Ali legacy award from Sports Illustrated; each recognized the $1 million Kaepernick (receiving an award from the ACLU in photo) has donated to various charities, even as he searches for an NFL job."

Strauss said Republicans are celebrating the NFL's ban on anthem protests as a victory now, but victory will be fleeting. He mentions how Vice-president Mike Pence and Donald Trump Jr. "spiked the proverbial football" and both tweeted the same hashtag: #winning. If history is any guide, Strauss argues:

"(T)he marginalization of outspoken and high-profile black athletes will not stay a win forever. During the past half-century, dominated as it has been by culture-rattling debates over race and social justice, there have been numerous examples of activist athletes who suffered ostracism and worse, only to see themselves welcomed and even glorified decades later by a society whose conscience finally caught up to the righteousness of their causes.

"The media who scorned them in the hottest moment of their protest produced respectful biopics and coolly reconsidered their roles in a much longer arc of history. In short, these kneeling football players’ reputations will likely be rehabilitated sufficiently that the general public who boycotted and harassed them for disrupting their entertainment with politics may well one day embrace them as unsung heroes."

Spiking objectivity, Strauss proceeded to quote liberals who agree with this premise. The first was Lou Moore, a sports historian and professor at Grand Valley State University, in Michigan. “This isn’t a win that history is going to look too kindly on,” Moore said. “It will take some time, but Kaepernick will be proven right.”

Leah Wright Rigueur, a professor of public policy at the ultra-liberal Harvard University, told Strauss, “His cause has already been recognized as righteous by so many outside the NFL and conservative circles.” These must be the "conservative circles" of the David Brooks (of The New York Times) variety!

Muhammad Ali biographer Jonathan Eig joined the Kaepernick chorus, too: "When you’re taking a stand, if you’re against discrimination and for equality, you’re probably going to end up on the right side of history.”

For further support of his claim that Kaepernick will one day be seen as a hero, Strauss looked to black athletes of the past whose image improved over time.

Early 20th century boxing champion Jack Johnson received a posthumous pardon last week from President Trump, for having violated the Mann Act (for transporting white women across state lines). Muhammad Ali was stripped of his boxing title for evading the draft, then later he lit the torch at the 1996 Atlanta Olympics.

Sprinters Tommie Smith and John Carlos protested America at the 1968 Mexico City Olympics and were sent home in disgrace. But San Jose State University has erected a statue of their protest and ESPN gave them the Arthur Ashe Award for Courage (which has become more a symbol of liberalism than courage). Strauss viewed these actions as a "thaw" in America's attitudes toward them. (Note: invoking "America" used very lightly!) Who's honoring these former rebels? Liberals who may never have viewed them negatively in the first place.

What does all this mean for Kaepernick, Strauss asks? Books, movies and more. "Kaepernick will be attached to the Black Lives Matter movement, and as the struggles of minority communities—institutional racism, mass incarceration, for example—are better understood in future years, he will be a symbol of the moment. Plus, he’ll have the benefit of Trump as a foil."

No doubt Kaepernick remains a hero to the ACLU, Amnesty International, Black Lives Matter and ESPN. Nevertheless, Strauss ultimately fails to persuade that Kaepernick's actions will one day bridge the mountainous divide of public opinion.