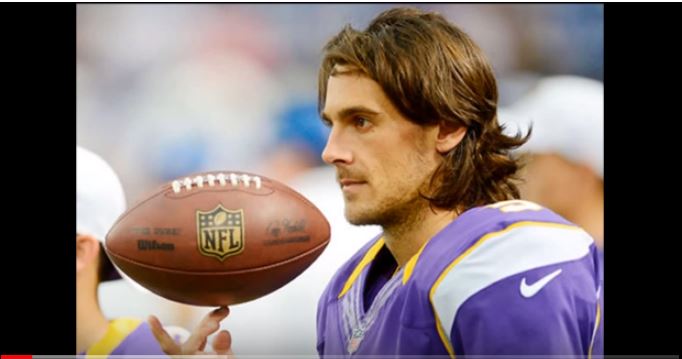 The Minnesota Vikings have gone full circle from the "Purple People Eaters," the nickname of their brutal defensive front line of the 1960s, to champion the colors of the rainbow. Zach Pereles of Yahoo! Sports relates how the Vikings allowed a has-been former punter to figuratively "blackmail" them into settling a dispute by promising to host an LGBTQ summit at their Eagan, Minnesota headquarters June 21.

Of course we're not talking about linebackers, guards, backs, tackles and quarterbacks here. We are talking about a pro football team that agreed with former punter and antagonist Chris Kluwe (seen in photo) to host the rainbow event. Kluwe was a nobody punter for the Vikes until he gained notoriety for his same-sex marriage activism. And Pereles didn't refer to any sort of pressure by Kluwe to get the Vikings to dummy up.

In 2012 Kluwe wrote a vulgarity-laced hate letter to Maryland state assembly delegate Emmett Burns. The lawmaker had spoken out against same-sex marriage, and Kluwe lectured to him that gay people "won't magically turn you into a lustful cockmonster," along with other choice words not fit for children to hear. Kluwe also campaigned against California's Proposition 8 marriage defense amendment, appeared on The Ellen DeGeneres Show and was Grand Marshal of the Twin Cities Pride festival.

Lest the Vikings draw the feared accusation of homophobia, Minnesota is kissing up to Kluwe and his LGBTQ friends. The team is now driving for the goal line of LGBTQ activism by inviting 200 people to the summit, including officials from the other NFL teams, along with people from local colleges and high schools.

Speakers will include Kluwe and Greg Louganis, the former Olympic diving champion. It's a fundraiser for local and national LGBTQ groups. Chris Hine, of the Minneapolis Star-Tribune, wrote it will feature four panels highlighting "how coaches and players can make sports a more welcome environment for LGBTQ athletes."

Vikings' COO Kevin Warren aims to make this huddle a recurring event. “We definitely want to make sure this is not a one-time event. I can say that with confidence,” Warren said. The organizers want to promote inclusion, but don't expect this version of "inclusion" to include Tony Perkins or Dr. Dobson.

In what comes across as a veiled threat, Kluwe said: “We obviously had our issues a while ago, but this is our way of looking forward and trying to figure out how we make sure that we set the stage for that not to happen again."

Just when you thought the NFL can't travel any further down the road of PC and social justice activism, you get another dose of reality disproving that. We've digressed from the bygone era of John Facenda's "Headcracker Suite" to the "rainbow suite," social justice activists disguised as football players forcing the league into a multi-million dollar campaign for prison reform and a has-been quarterback turning the league into a collusion lawsuit circus. All with overwhelming media approval!