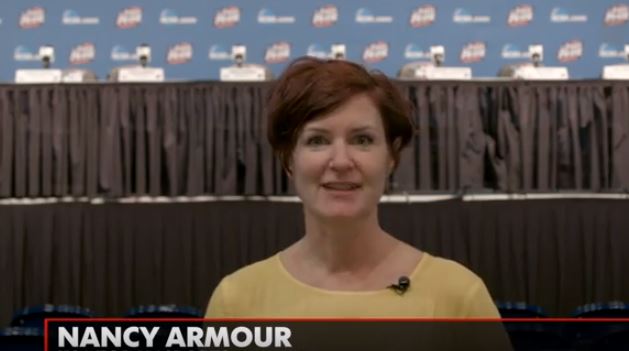 If Nancy Armour (photo) has her way, the Super Bowl will become a battle of champions between the Constitution Supporters Conference and the Know Nothing Conference. The hard-Left writer for USA Today sports says these conferences would be broken down between team owners who respect the free speech rights of protesting football players (CSC) and the ideologue owners who do not believe that all men were created equal (KNC). By any other name, it's a division based on social justice activism.

The inspiration for Armour's new NFL with battle lines drawn by politics? Dallas Cowboys' owner Jerry Jones, who has previously suggested that any of his players taking a knee can also take a seat on the bench. And Houston's Bob McNair, who last year said the "inmate" protesting players are running the "prison." These two owners "are determined to make a show of who’s for 'Merica and who’s not," so "the NFL ought to realign the league so there can be no confusion about anyone’s position," she writes.

Here's Armour's criteria for the CSC, obviously her preferred conference:

"The CSC would be the Constitution Supporters Conference, made up of teams whose owners recognize that the protests during the anthem are neither anti-police nor anti-military, but meant to draw attention to police brutality in communities of color and economic inequality. These owners know the right to free speech that’s protected by the First Amendment refers to censorship by the government, not employers, but they’re also smart enough to know that stifling political dissent in a country founded on protest is the very definition of unAmerican."

Never mind that players work for private entities and the First Amendment doesn't enter into it. Colin Kaepernick can say what he likes away from the game and face no governmental consequences. People may think he's a jerk (he is), but he can say it without fear of criminal prosecution. That's what everyone is guaranteed under the actual constituion, rather than Arnour's unicorn ownwer's manual.

Just think of Armour's despised KNC as the "island of misfit owners" conference for the politically incorrect:

"The KNC would be for those who’ve forgotten what they learned in eighth-grade social studies – and it’s clear there are plenty in this country who could use a refresher course – the Know Nothings were a political party in the mid-1800s that cloaked discrimination in the defense of traditional religious and political values. These ideologues wanted to preserve what they saw as their rightful place in the social, economic and political hierarchies, and were horrified that some people were actually taking that 'all men being created equal' idea seriously."

Armour declares Houston and Dallas the "charter teams in the KNC" and adds Carolina (until the team is sold by sexist owner Jerry Richardson.) She'd dump Cincinnati here, too, because Bengals' owner Mike Brown asked Colin Kaepernick's pal and fellow bitter free agent Eric Reid if he would kneel as a member of his team. Tampa Bay also gets thrown onto this "island" conference because Bucs' owner Edward Glazer hosted a fundraiser for President Donald Trump.

This plan makes for a lopsided league of nine enlightened SJW teams in Armour's favored KNC and just five in the evil Know Nothing Conference of losers. Eighteen of the NFL's 32 teams are left unassigned. Clearly she hasn't thought this through, so she suggests another alignment:

"If you don’t like those ideas for conferences, then I’d suggest the Hypocrites and the Non-Hypocrites."

Hurling additional insults at the Know Nothings, Armour lectures that politically incorrect owners want to suppress political actions they disagree with and aim "to identify those who wish to undermine our most cherished ideals, whose actions are an affront to our democracy."

Recapping Armour's message,the NFL needs to realign its two conferences by political divisions and punish those teams not holding to the liberal orthodoxy of social justice protest favored by benevolent media types like herself. I guess the whole notion of actual competition, the on-field activities, in the NFL is now a moot point at "USJW Today" Sports.