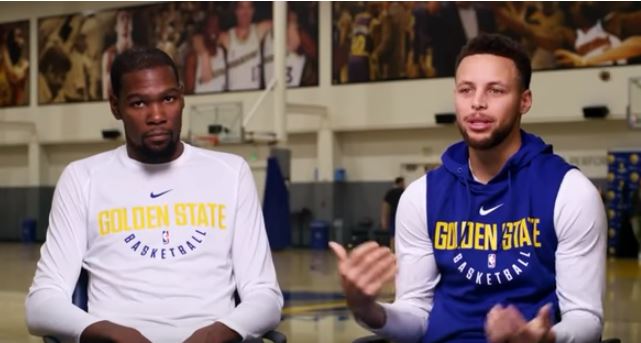 "How does the NFL not see that Colin Kaepernick is widely admired by society beyond the end zones?" It's a question that baffles Monte Pool, NBC Sports BayArea writer who senses a world of Kaepernick supporters--including the Golden State Warriors--that clearly see him as good for the planet.

"Kaepernick's popularity is rising again, and not because he's abandoned his cause," Poole writes. "He remains committed to the perpetual struggle for social justice, but now supporters worldwide are joining those in the Bay Area, including members of the NBA champion Warriors."

Poole laments the fact that Kaepernick still hasn't had a single job offer from an NFL team. But all is not lost! "What he does have, as of last weekend, is the kind of global recognition that would shame the NFL if it weren't so utterly shameless."

That global recognition comes from Amnesty International, a global organization that last week named Kaepernick its 2018 Ambassador of Conscience Award winner. "The upshot: Kaepernick is good for the planet but somehow bad for the NFL."

Amnesty International is an organization that advocates for abortion, gun control, same-sex rights and opposes Israel. Kaepernick is perfect for AI, but not for the NFL, which has already suffered substantial losses in business and public approval, thanks to the mess Kaepernick started.

As Kaepernick piles up the awards, media lefties and liberal athletes keep stoking his ego. He's got the admiration of the NBA champion Golden State Warriors. All-star forward Kevin Durant (on left in photograph with teammate Steph Curry) says, "Colin doesn't do it for the awards, doesn't do it for the accolades. I think he's really doing it for the people that don't have a voice and the people who are fighting for change. I applaud him. And I'll continue to support him, just like everybody else on our team and a lot of guys in professional sports."

To which Poole says: "Durant is a member of the new wave of athlete/activists willing to speak out beyond the scope of their sport. He, like teammate Stephen Curry and fellow NBA star LeBron James, has been openly critical of President Donald Trump. Yet all three remain as popular as ever. Curry sells more NBA merchandise than anyone, with James and Durant running second and third."

Kaepernick shows to Durant "there is some good in the world. We might be in a bad place in the United States, but around the world there's still some good." Some of that "good" is seen in Durant's teammate Steff Curry, who "politely stated his refusal to accept an invitation from the Trump White House," Poole writes. But Curry's definition of "polite" was actually calling the president an asset without the "et."

The coach of these amazing social justice Warriors, Steve Kerr, calls Kaepernick's AI award "awesome. The first thing that I think of, when you look back at the civil rights movement, Muhammad Ali was hated in much of this country. He was considered a traitor. He was supposed to go to jail.

"When I think of Kaepernick, I think of Bill Russell, Muhammad Ali, Jim Brown, athletes were leaders in the civil rights movement of the 1960s. What they were doing was very unpopular and they were vilified by a good section of the country. So nothing's changed."

Though the NFL allows kneeling and social justice activism, Poole claims those activities are not considered fashionable by the league. The NFL "is caught between conservative elements of its fan base and the progressive folk standing behind those, like Kaepernick, willing to nudge society toward justice and equal rights. The NFL thus far has, even as its attendance and TV ratings slide, consistently sides with the former."

"They're looking unkind and unenlightened at the moment," Warriors' assistant coach Ron Adams said of the NFL.

Americans were also unenlightened back in the 1960s, Poole contents, when Muhammad Ali "faced withering criticism and malicious prosecution for sticking to his religious principles, and when Tommie Smith and John Carlos were stripped of their medals and banished from the Olympic Village in Mexico City for raising gloved fists as a peaceful response to racism. Ali left this earth a hero. Smith and Carlos have come to represent courage and a commitment to humanity. Here's Kaepernick representing those ideals in real time."

Many Americans disagree with Kaepernick, Poole and the Warriors. But David West, a good Warrior liberal, puts them in their place. "A lot of people are on the wrong side of history. And it's up to us to make sure nobody forgets it." The Warriors and the progressives are standing up to make America great again, according to Poole:

"Voices are rising in that regard. More and more people are standing on principle, from teenagers seeking reasonable gun laws to the Kaepernicks and the Eric Reids, who jeopardize their employment in pursuit of a greater America."

Coach Kerr made a bold prediction about Kaepernick's place in history:

"I'm glad that Kaepernick is being recognized. It's a good reminder that when you're on the side of human rights, you're going to end up on the right side of history. Years from now, Kaepernick will be much more respected and celebrated."

He'll be celebrated only if the "unenlightened" can get past Kaepernick's disrespect of the flag and veterans, his hatred of police, his criticism of America while on foreign soil and his admiration for the late Cuban dictator Fidel Castro.