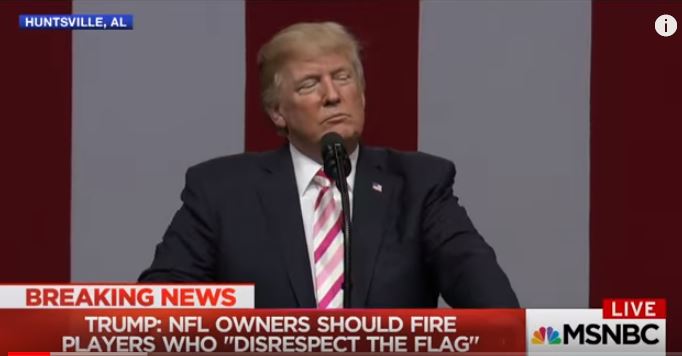 You'll be hard-pressed to find sports media who aren't pulling for Colin Kaepernick to win his collusion case against the NFL. Yahoo! Sports' writer Charles Robinson is trying to make the case that President Donald Trump influenced the NFL to collude against Kaepernick. He wrote Tuesday that Kaepernick’s lawyers are pursuing a strategy to prove the president influenced the entire NFL to snub the free agent quarterback throughout the 2017 football season.

The impetus for Robinson's anti-Trump thrust was based on last week's deposition of Miami Dolphins' owner Stephen Ross by Kaepernick's legal team. He writes, "Ross tied the league’s thought process on player protests to the political saber-rattling of President Donald Trump":

"While the substance of Ross’ deposition is sealed, it’s believed the proceedings were aimed at dissecting recorded statements Ross made to the New York Daily News in early March in which he indicated the NFL’s perspective on players kneeling during the national anthem was directly influenced by Trump."

Ross said he initially supported player protests on a free speech basis. After Trump made his remarks in Alabama about firing the players who were kneeling, Ross changed his mind about the protests, Robinson writes:

"Ross was recorded saying that his personal view on kneeling as a form of protest against racial and social injustice changed in relation to Trump’s framing of the act as being anti-military. On its face, such an admission could provide Kaepernick’s legal team with a solid foundation in efforts to prove Trump directly influenced the quarterback’s employment status."

Robinson views Ross's statements as one of three rays of hope for his man Kaepernick. The others came from Dallas owner Jerry Jones, who had a conversation with President Trump on the protests, and New England owner Robert Kraft, who shared a flight on Air Force One with Trump the day before the President's Alabama speech.

Where's the connection to Kaepernick though? It's only implied. President Trump does not make individual player personnel decisions for the NFL's 32 teams, but Robinson stated that Kaepernick's attorneys are focused on "making Trump a sizable part of the collusion allegation against the league."

League owners were potentially fearful of the president’s potential scorn, Robinson suggested. Additional evidence for Trump involvement in collusion (surely if not with Russia, then certainly with the NFL) came from this remark the President delivered on March 20, 2017 in Kentucky:

“Your San Francisco quarterback, I’m sure nobody ever heard of him. … There was an article today that was reported, that NFL owners don’t want to pick him up because they don’t want to get a nasty tweet from Donald Trump. Do you believe that? I just saw that.”

Trump later said the NFL could have suspended Kaepernick, which is a country mile away from persuading 32 men to blackball him.

That's all Robinson can come up with: owners talking in private with the president, one owner saying Trump influenced his opinion on protests, comments by President Trump critical of Kaepernick. It's not like there were any executive orders barring the Black Lives Matter activist from employment in the NFL. Unrelenting, Robinson takes one last swing at it again, insisting:

"With all of those statements viewed inside of the context of what Ross told the Daily News about Trump realigning his own perspective on kneeling, it creates potentially connective tissue between Kaepernick’s employment, the NFL and the president’s influence. Whether that will ultimately be enough to prove some kind of collusion remains to be seen."