Journalists Joke That Man in Daniels Sketch Is Tom Brady 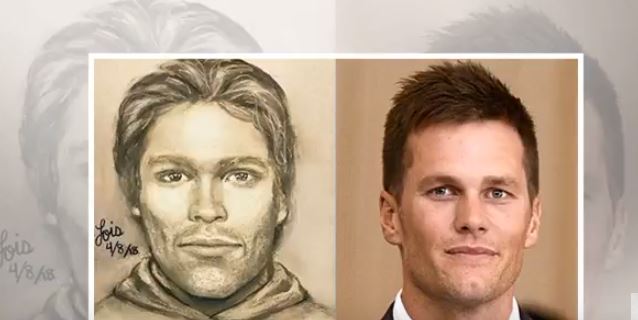 Since Stormy Daniels appeared yesterday on The View and released an artist's sketch of the man she said threatened her in 2011 over her affair with Donald Trump, numerous people have jokingly tweeted their opinion that he looks like the president's friend Tom Brady (at right in photo), quarterback of the New England Patriots. Sports Illustrated's Jimmy Traina, a liberal writer and the author of the "Extra Mustard" column, listed several tweets by media implying that Brady might have done Trump's dirty work for him.

"When the sketch hit Twitter, it was one man who came to the minds of most sleuths out there -- Tom Brady," Traina wrote.

Brady is a friend of the president's and a "Make America Great Again" hat has been seen in his locker. That turned into a huge media spectacle when Brady and the Patriots played in the 2017 Super Bowl, just a matter of weeks after Trump's election. Since yesterday, media tweeters have wasted little time in attempting to connect the dots on a Trump-Brady conspiracy surrounding Daniels' allegations.

Littal's sarcastic reasoning is this: If Brady had the wherewithal to harass Daniels and to quarterback the Patriots' dynasty, he surely has to be the greatest passer of all-time.

Jemele Hill, a writer for The Undefeated who, last fall as co-anchor of SportsCenter at ESPN, tweeted that the president and his supporters are "white supremacists," jumped in, too. She remarked, "Uh is it just me or does he kind of look like Tom Brady?"

Traina concluded: "Still, it was Brady, the man who famously had a 'Make America Great Again' hat in his locker, who became the top 'culprit.'"