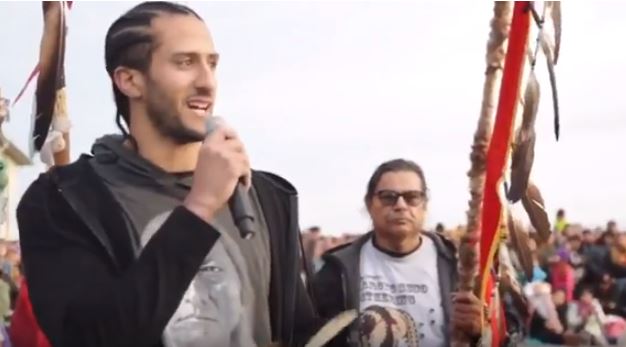 For backtracking on a previous promise to discontinue kneeling during the national anthem, Colin Kaepernick may have lost his chance to try out for the Seattle Seahawks. This reality could not persuade USA Today's Dan Wolken that the notorious social justice warrior who went back on his word is anything other than a righteous man of impeccable character and the face of athlete activism. And a man for whom the protest movement he created is bigger than any back-up quarterbacking position that comes with strings attached.

The Seahawks, who recently parted ways with liberal mavericks Michael Bennett and Richard Sherman, postponed a planned visit by Kaepernick (attending un-Thanksgiving protest at Alcatraz in 2017 in above photo) because he could not guarantee he'll end his anthem protest and because they dared ask if they'd be getting an activist or a football player.

Last year Kaepernick indicated that, if signed to a contract by an NFL team, he'd stand to honor America during the playing of the Star Spangled Banner. Now the radical activist who rages against police brutality and racial inequality and, more recently, retweeted an anti-Israel story, says not so fast! The new Kaepernick is as toxic as the old Kaepernick!

But to media fans like Wolken, the Seahawks and the NFL are the villains, Kaepernick a man of incredible principle and stature:

"So while there’s certainly going to be a segment of the public that uses Thursday’s reported turn of events with Kaepernick and the Seahawks to wave their I-told-you-sos at the so-called Social Justice Warriors they despise so much, perhaps the real story here is that Kaepernick remains a man of exceptional principle."

Wolken further states that "any attempt to sign Kaepernick with the condition that his kneeling days are over feels like little more than a setup." Along with the fact that he's built credibility extending beyond football, for him to return to the NFL on the league's terms would result in more harm than good.

Continuing his rah-rah Kaepernick obsession, Wolken asserts that the former quarterback's supporters and his detractors must agree he's standing "for the greater good" and he "took the more righteous path." He's taking that trail today, even if it costs him a lucrative NFL contract, because he's not a phony or an opportunist.

Overlooking the NFL's $89 million gift to the league's social justice warriors to push for prison and education reforms, Wolken says the former 49er is the real genuine deal:

"Whether you like what Kaepernick stands for or not, he continues to be authentic while the NFL continues to pretend the world outside its 31 stadiums doesn’t exist."

Let's cut to the chase. Kaepernick is a loose cannon SJW who incredibly damaged the NFL's brand and Its bottom line. Any team thinking about signing him would be a glutton for punishment. Seattle came to the brink of making that public relations disaster, but blinked and didn't step off that cliff. At least not yet.