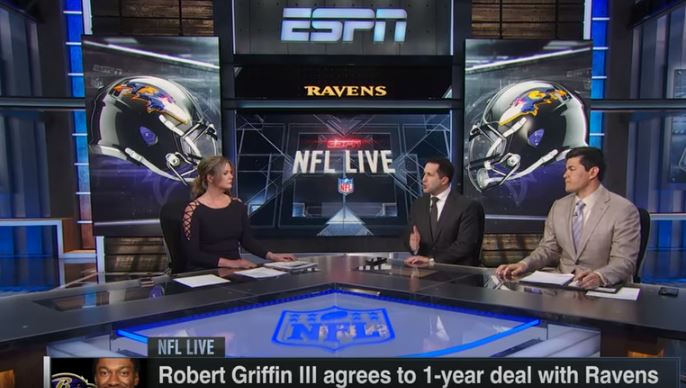 To no one's surprise, liberal sports media are angry that free agent quarterback Robert Griffin III has signed an NFL contract while the polarizing Colin Kaepernick, who sued the NFL for collusion, remains a free agent in exile. Stephen A. Crockett Jr. of The Root blog suggests that Kaepernick retaliate by attending a collusion hearing and using the Griffin signing to taunt team owners about how many millions he'll win in his collusion lawsuit against the NFL.

Kaepernick is beginning his second offseason free agency period as an unwanted pariah who has inflicted so much damage on the NFL that none of the owners will consider signing him. Griffin also spent last season out of pro football due to declining performance and a lack of interest by the league's 32 teams. Today media are reporting the Baltimore Ravens signed RGIII to a one-year contract to serve as a back-up quarterback.

Crockett encouraged Kaepernick to strengthen his collusion case against the owners and then denigrated Griffin as a "liability." Here's what he advised the man who started all the disrespectful kneeling during the national anthem to do:

"Colin Kaepernick needs to walk into the National Football League’s hearings on whether or not team owners colluded to keep him out of the NFL and present the news that Robert Griffin III has been signed by the Baltimore Ravens to back up 11-year veteran Joe Flacco.

"Then Kaepernick should jump onto the conference table and begin counting aloud. When asked what he’s counting, Kaepernick should reply, 'All the millions you bitches are going to have to pay me.' Then he should pick his Afro gloriously as he exits the room."

Crockett also attacked white sports media: "Seriously, if the argument is purely about football, which many white sports pundits have tried to make it, then someone has to explain to me in football terms how RG3 gets signed before Kaepernick."

Those whitey sports types should know that "hiring a quarterback who can’t stay healthy, can’t throw short passes and stays in the pocket longer than spare pennies isn’t a quarterback; he’s a liability."

So it's all RGIII's fault now. He's a "fragile quarterback" who can't throw and can't stay healthy, Crockett whines. "As my uncle used to say, 'Something is unclean in these greens.' I think we all knew this even before RG3 was signed."

On Fox Sports 1's The Undisputed TV program today, Kaepernick apologist Shannon Sharpe said he didn't begrudge Griffin's opportunity, but he complained about Kaepernick not landing a job. "The reason has been abundantly clear from the start. It has nothing to do with his ability to play quarterback, and that's a shame and sad."

You just knew this would happen if Griffin got signed before Kaepernick. In recent days multiple media outlets have launched efforts to try to persuade teams to sign Kaepernick.

Today, Mitchell Renz of the Chat Sports blog listed five teams that could use Kaepernick. Two days ago, ESPN's Jamison Hensley speculated on Baltimore signing Kaepernick. The Mile High Report asked what if the Denver Broncos had signed him. This media cheerleading for Kap also went on for much of 2017 and will likely to continue for some time yet. Pitching Kaepernick has become part of the job for many in sports media. When will they get a clue that the defiant one has burned too many bridges and is not coming back to the NFL?