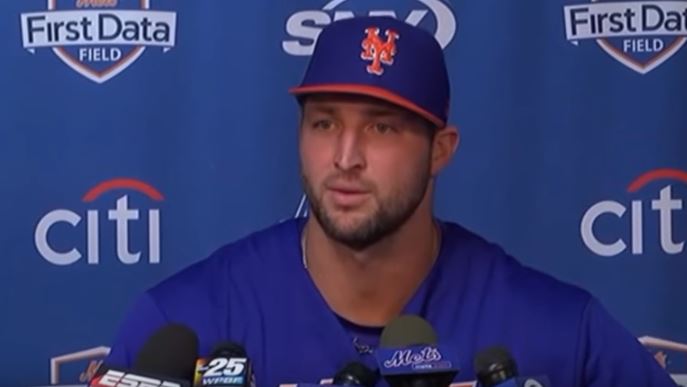 When New York Mets' General Manager Sandy Alderson said Sunday that Tim Tebow could possibly make it to the major leagues, you knew the media haters would resort to throwing verbal bean balls at him and trashing his football career all over again. The New York Post's Ken Davidoff called him a joke who will turn into a farce.

Davidoff rattles off a list of trite and trivial grievances against Tebow that amount to sheer pettiness, if not utter contempt. For one, he implies that Tebow's presence in professional baseball is a threat to the media: "Sandy Alderson rolled a verbal hand grenade into the press conference room Sunday at First Data Field when he proclaimed of Tebow, the Mets’ minor league outfielder and de facto mental skills coach, 'I think he will play in the major leagues. That’s my guess. That’s my hope and to some extent now, after a year and a half, a modest expectation.'”

After ducking for cover from that verbal hand grenade, Davidoff accused Tebow of lacking genuineness and following a script:

"In response to his general manager’s bold prediction, Tebow stuck to his script and his shtick at a subsequent news conference.

“For me, my goal isn’t about what’s going to happen one day,” he said. “My goal is to focus on this day.”

Yes, that's scripted shtick -- and utterly indistringuishable from what every other baseball player says in every other interview. Not informative and perhaps mildly annoying, but hardly worth the bile.

Then there's this imaginary line that Davidoff has scratched in the sand for Tebow. He promises, "If you keep reading, I’ll tell you when a line would be crossed."

For Davidoff, it also de-legitimizes Tebow as a baseball player that a merchandising executive, rather than a baseball scout, is the person who actually signed Tebow to a Mets' contract:

"Tebow’s career with the Mets is fundamentally a joke, a gag. Something to be enjoyed yet not taken seriously. That can be stated as fact because, in the Mets’ 2017 media guide, the team identified Tebow’s 'signing scout' as James Benesh. James Benesh works not as a scout, but as a Mets merchandising executive.

“I’m happy he’s here,” Alderson, who divulged that media-guide tidbit last year, said of Tebow. “I think he’s great for the team. I think he’s great for baseball. He was phenomenal for minor league baseball last year. The notion that he should have been excluded from the game because he’s not coming through the traditional sources, I think, is crazy."

Davidoff concedes that the Mets' farm teams in Port St. Lucie and Columbia benefitted last year from Tebow's ability to bring fans to the games in record numbers. And his teammates benefitted "from his generous and diligent nature." Yet he loathes the thought of the Mets calling Tebow up to the big-league team in September.

If the Mets had an extra-inning game and allowed Tebow to pinch-hit, he might possibly belt a ball over the fence for a home run, Davidoff theorizes. "Most likely, he’d hang out, either cheerleading a contending club or brightening up a down-and-out group, and get a few opportunities in blowouts." Such a promotion also would lead to rolled eyeballs throughout baseball. Yeah, brightening up a team would be horrendous for baseball! Perish the thought!

Davidoff finally lets on how Tebow the villain would cross that line and devolve major league baseball into a "farce, a mocking of the game’s core principles." That would occur if the Mets put Tebow on their 40-man roster of protected players and another team then selected an unprotected and more deserving player, in Davidoff's estimation. That would amount to "malpractice" just so the Mets could keep Tebow. God forbid anyone named Tebow should violate baseball's holy grail, its core principles.

Tebow could probably stop a lot of the media hate directed at him by kneeling for the national anthem and profaning the president. Then that imaginary line and talk of a farce would disappear real fast. But this man of integrity would never stoop that low.