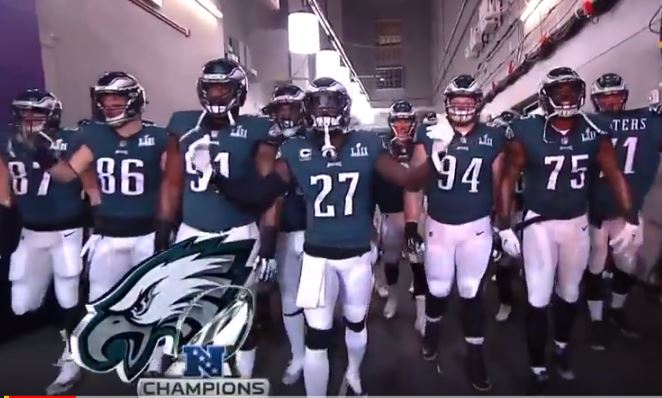 The Undefeated's senior NFL writer, Jason Reid, points out that the newly crowned world champion Philadelphia Eagles have an unofficial anthem that really gets them jacked up. Though Harold Jenkins and some of his Eagles' teammates protested the national anthem for much of the 2017 season (albeit in the arguably less disrespectful raised-fist manner), the league's most socially woke team ran out of the tunnel for Super Bowl 52 rilin' up to gangsta rapper/convict Meek Mill's "Dreams and Nightmares."

Mill is in a medium-security prison in Chester, Pa., serving time for violating probation. The man jailed years ago on drug and gun charges is being credited by Reid for fueling the Eagles' Super Bowl appearance. Jenkins and protester teammates like wide receiver Torrey Smith are calling for the release of this criminal. Nowhere in Reid's tribute to the Eagles did he mention any of the lyrics in the Eagles' preferred anthem. Here's a short sampling of Mill's putrid lines from "Dreams and Nightmares":

There's much more gutter garbage like that and all of it disgusting, but you get the idea. It's gangsta rap, for crying out loud.

A big part of Reid's story is about praising Jenkins, the leader of a coalition of NFL protesters who shook down the league to the tune of $89 million for their social justice agenda. After taking down the defending champion Patriots last night, Jenkins said Mill was on his mind:

“We really found a lot of energy and juice from Meek’s music,” said Jenkins. ... “And we obviously still support him. We want him to get home. We know this means a lot to him. Hopefully, this brings him a little bit of joy. We know it’s going to bring the city of Philadelphia a lot of joy.”

Reid wrote of Mill last week that, "The incarcerated Philadelphia native — whose situation typifies problems with sentencing guidelines, criminal justice reform advocates say — has helped fuel the Eagles’ first Super Bowl appearance in 13 seasons, providing the team’s unofficial anthem. And in turn, the Eagles have bolstered Mill’s spirits while he serves his sentence for violating probation stemming from a 2008 gun and drug case. Also from Reid:

“Before each game, Meek is getting us riled up for the game. You can’t help but get riled up. You just feel that energy. And our crowd feels that energy. Just play Meek, get the crowd riled up and just go ball out.”

Reid takes great joy in the fact that the players "who have been at the forefront of the new civil rights movement would help lead the way to a franchise’s first Super Bowl title. And that after selflessly helping others, those players would be rewarded with more than they could have envisioned."

As the game ended last night and confetti rained from the stadium roof, it sunk in on Reid that Jenkins, Smith and Chris Long, the team's three leading liberal activists, "had delivered all season both on behalf of their teammates in the locker room as well as people in underprivileged communities. That’s called winning on and off the field."

Those three Eagles and LaGarrette Blount weren't finished yet though. CNN reported they had one more message to deliver to the world: they are not going to attend the team's White House celebration with President Donald Trump, a past target of Mill's rap. Even though Reid calls the Eagles a highly professional bunch, their leaders aren't big enough to set differences aside and take advantage of an opportunity to meet the president man to man and discuss the issues important to them.

But then, maybe if a woke White House staff gives the Eagles a "Dreams and Nightmares" gangsta rap entrance, they'd all be riled up enough to attend the celebration.